‘Honey Bunches of Ovaries’ Cereal Coming To A Market Near You

Daily Mail UK released the news on May 25 and reported that Intimina “claims conversations about periods are not ‘truly normalised.’” So the solution is to talk about them during a meal? Fast way to lose an appetite if you ask me.

The cereal is marketed as “womb-shaped” but includes the entire female reproductive system. Yippee!! Now every morning you can wake up and run to the kitchen to eat some wheat-based fallopian tubes, cervixes, ovaries, and vaginas. Plain old Cheerios are way last year. 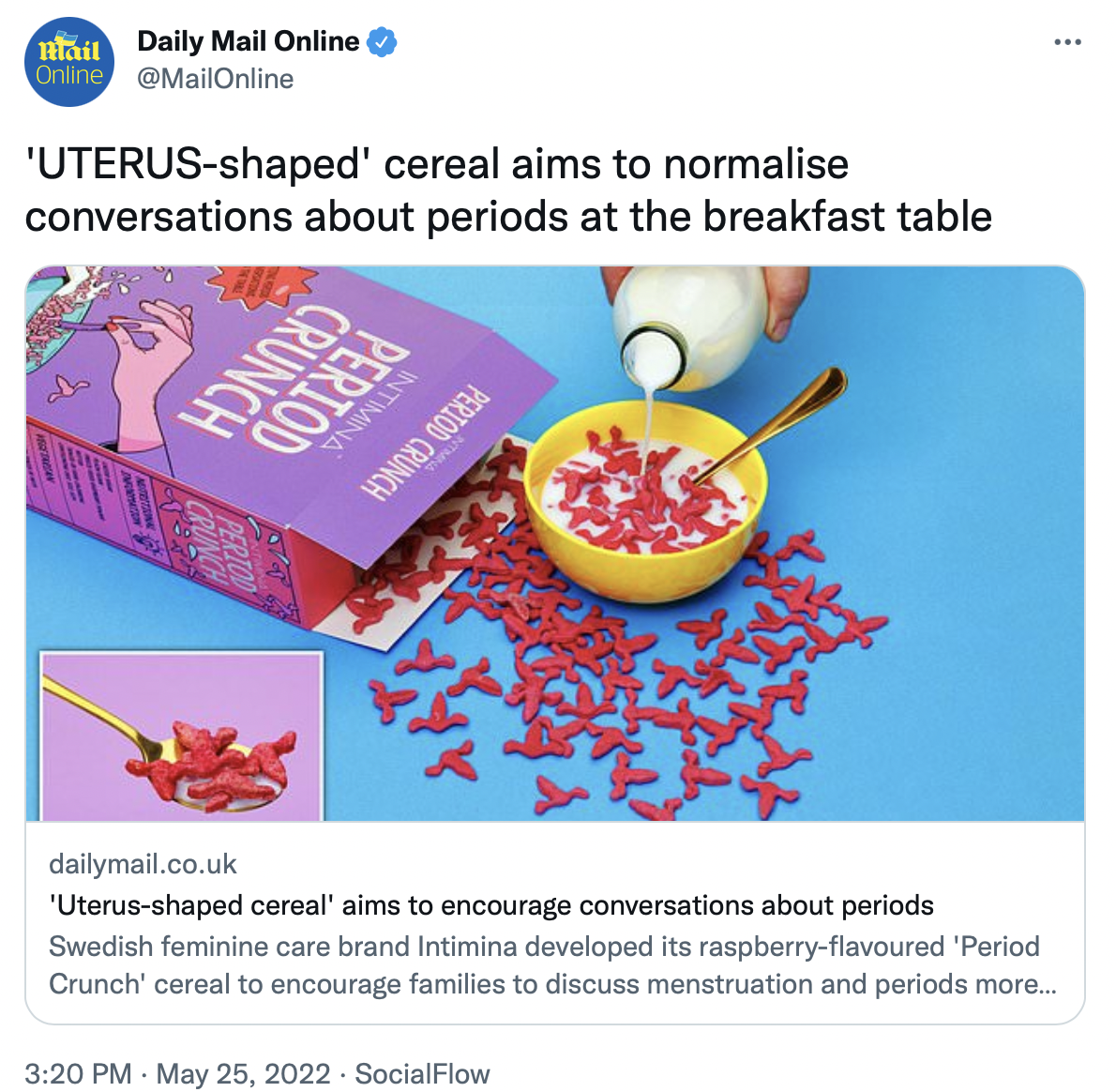 Supposedly 48% of gals are “too embarrassed” to talk about their period. So the solution to bring the conversation to the table — literally.

I’d argue that eating period parts for breakfast would make me more embarrassed. But who am I to say that? I’m just a woman.

Intimina’s Danela Zagar claims that “There's no more normal and everyday a scene than the whole household sitting down together at the kitchen table and talking over a meal.” Sure, periods are normal but so is pooping and I’d really rather NOT talk about poop during breakfast. Same applies for menstruation.

Barstool Sports’ Jerry Thorton mocked the cereal — rightfully so. “Well nothing will draw them to the table and keep them there like a big, heaping bowlful of Whole Grain Uter-Os. Honey Bunches of Ovaries. Cinnamon Toast Cervix. Period Crunch is delicious, nutritious, fun, and educational for kids of all ages and orientations.” LMAO

Well kids, the joke's over, sorta. The Period Crunch cereal isn't planned to reach store shelves anytime in the near future but if you really want some “frosted fallopians” you can contact Intimina directly. (No, I’m not giving you the link).

I guess we’re gonna have to get our reproductive lessons from books or phones. What a bummer.

Sen. @MarshaBlackburn on Judge Jackson refusing to define a 'woman':
"that judge Jackson is beholden to the radical left that is teaching our children that they can choose their own sex. It tells me that she is more committed to woke Progressive ideology." pic.twitter.com/EuQWyjOg1D