This might be an indication that the dominoes are beginning to fall in Hollywood.

Oscar-nominated writer and director James Toback is facing multiple accusations of sexual harassment, according to an exposé by the Los Angeles Times.

Now, other Hollywood directors are speaking up about the allegations.

James Gunn, who previously directed the first "Guardians of the Galaxy" movie, admitted in a Facebook post that he's known about Toback's alleged history of harassment for a long while.

Here's some of what Gunn wrote:

When I lived in New York, in the 'nineties, this dude was EVERYWHERE. I have personally met at least FIFTEEN WOMEN, probably more, who say that he's accosted them in NYC. He essentially goes up to women and says, "Hey, I'm James Toback, and I'm a famous director, and I feel like there's a connection between us." Then he shows them some article on himself or some other artifact to prove he is who he is, and tries to get them to go somewhere else with him.

He has done this to three girls I’ve dated, two of my very best friends, and a family member... twice. Yes, he came up to her twice with the same stupid line, not realizing she was the same person. This is in addition to many other women I've talked to at parties or dinners about their interactions with Toback.

Gunn also responded to those that have asked him, "James, why didn't you say anything if you knew this was happening?"

I put myself in legal jeopardy doing so, and I'm not sure I would do the same today. If I actually SAW something, it would be a different story. But simply sharing secondhand stories is legally complicated, and could open me to being sued. It is necessary that firsthand accounts come out to get these stories noticed, whether it's from the victim or someone else who witnesses what's occurring.

Other directors were quick to distance themselves from Toback over the weekend: 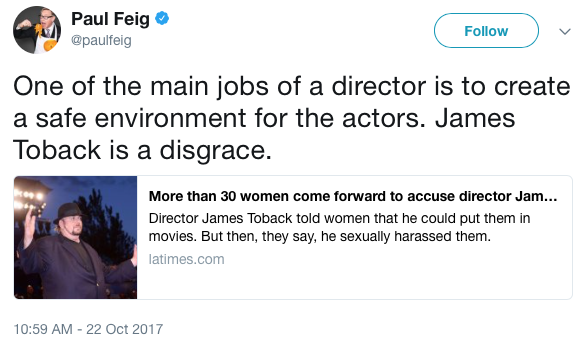 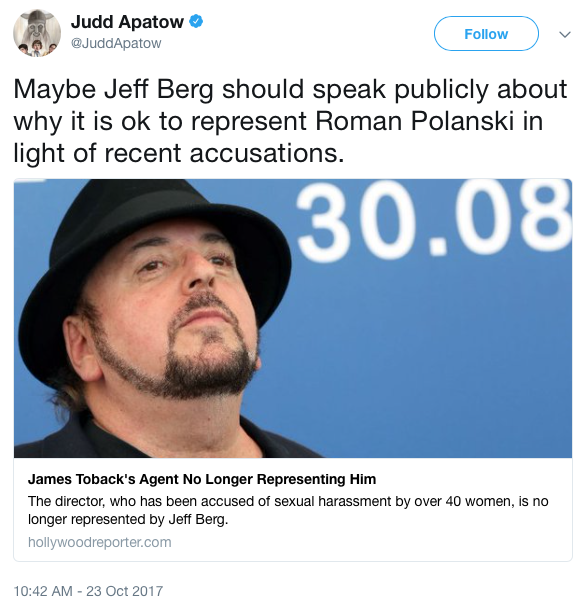 Here's what Toback's been accused of, according to multiple witnesses (WARNING: Graphic subject matter):

His opening line had a few variations. One went: “My name’s James Toback. I’m a movie director. Have you ever seen ‘Black and White’ or ‘Two Girls and a Guy’?”

Probably not. So he’d start to drop names. He had an Oscar nomination for writing the Warren Beatty movie “Bugsy.” He directed Robert Downey Jr., in three movies. The actor, Toback claimed, was a close friend; he had “invented him.” If you didn’t believe him, he would pull out a business card or an article that had been written about him to prove he had some juice in Hollywood. That he could make you a star.

But first, he’d need to get to know you. Intimately. Trust him, he’d say. It’s all part of his process.

Then, in a hotel room, a movie trailer, a public park, meetings framed as interviews or auditions quickly turned sexual, according to 38 women who, in separate interviews told the Los Angeles Times of similar encounters they had with Toback.

Get the idea? If the allegations against Toback are true, then this is a very sick individual.

With Hollywood producer Harvey Weinstein also facing similar accusations, are these types of stories exposing a trend in Hollywood, or is this just a few bad apples in the bunch?