It’s not like lying has ever been taboo in the land of Congress. But, lying is simply a tool of politicians who’re seemingly only interested in protecting their own narrative — even if that lie said politician tells isn’t based in any accurate knowledge of history.

I think two weeks ago or so we celebrated, or just took a moment I think in our country to remember the Holocaust. There’s always kind of a calming feeling I tell folks when I think of the Holocaust, and the tragedy of the Holocaust, and the fact that it was my ancestors — Palestinians — who lost their land and some lost their lives, their livelihood, their human dignity, their existence in many ways, have been wiped out, and some people’s passports… all of it was in the name of trying to create a safe haven for Jews, post-the Holocaust, post-the tragedy and the horrific persecution of Jews across the world at that time. And I love the fact that it was my ancestors that provided that, right, in many ways. But they did it in a way that took their human dignity away and it was forced on them. And so, when I think about a one-state, I think about the fact that why can’t we do it in a better way? And I don’t want people to do it in the name of Judaism, just like I don’t want people to use Islam in that way. It has to be done in a way of values around equality and around the fact that you shouldn’t oppress others so that you can feel free and safe. Why can’t we all be free and safe together?

Huh? Did I miss a memo? Did that actually happen around the time of World War II?

You can watch and listen to Tlaib's comments below:

As Ellie Bufkin reported for The Federalist, the Washington Examiner’s Philip Klein did an excellent job listing facts that directly contradict Tlaib’s comments.

Here are two of the points Klein raises that shines doubt on Tlaib’s claims:

— During World War II, the Palestinian leader at the time, the Grand Mufti of Jerusalem Muhammad Amin al-Husayni, met with Adolf Hitler and allied with the Nazis. As the U.S. Holocaust Memorial Museum recounts, "al-Husayni collaborated with the German and Italian governments by broadcasting pro-Axis, anti-British, and anti-Jewish propaganda via radio to the Arab world; inciting violence against Jews and the British authorities in the Middle East; and recruiting young men of Islamic faith for service in German military, Waffen-SS , and auxiliary units. In turn, the Germans and the Italians used al-Husayni as a tool to inspire support and collaboration among Muslim residents of regions under Axis control and to incite anti-Allied violence and rebellion among Muslims residing beyond the reach of German arms.”

— After World War II, when the Jewish people declared the state of Israel, their official proclamation said, "We appeal - in the very midst of the onslaught launched against us now for months - to the Arab inhabitants of the State of Israel to preserve peace and participate in the upbuilding of the State on the basis of full and equal citizenship and due representation in all its provisional and permanent institutions." Instead of choosing to live peacefully, however, Arab leaders encouraged Arabs to flee Israel, and the next day, the young nation was invaded by Egypt, Syria, Jordan, Lebanon, and Iraq.

There were a few other points that Klein put forth that raises the question of why Tlaib couldn’t perform a simple Google search to find actual facts about the Holocaust and World War II that wouldn’t have made it seem like she just made up the story she told Isikoff and Klaidman.

The “Imam of Peace,” Imam Mohamad Twahidi, tweeted his own response to Tlaib’s comments by taking her to task for her “hot take.”

You mean my ancestors came and converted yours into Islam by the sword (from Judaism/Christianity) and now you think that by changing your beliefs you can also change Jerusalem’s Jewish identity. Nice try. You’re the guest here, not the Jewish people. https://t.co/kATgRJ37ne

Tlaib posted a defensive tweet on Sunday where she did what she does best — play the victim. 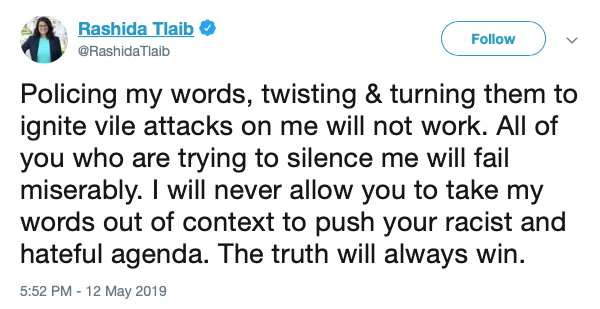 Whenever I see someone that's usually wrong about most things bring up the argument that people only criticize them because of some "racist and hateful agenda," I see someone without an actual argument. Those who constantly use racism as a crutch for their own ineptitude towards certain topics do so in order to shut down opposing thought.

And who’s trying to “silence” her? Just because people criticize her comments doesn’t mean they want to take away her right to free speech. But, don’t be surprised when said free speech gets scrutinized for seemingly being inaccurate. Free speech doesn’t protect you from criticism. Plus, Tlaib’s a congresswoman. If she can’t take criticism, she won’t fare well in Washington.

Maybe if Tlaib didn't say things that people could legitimately factually question, she wouldn't have to be so sensitive when people criticize her.