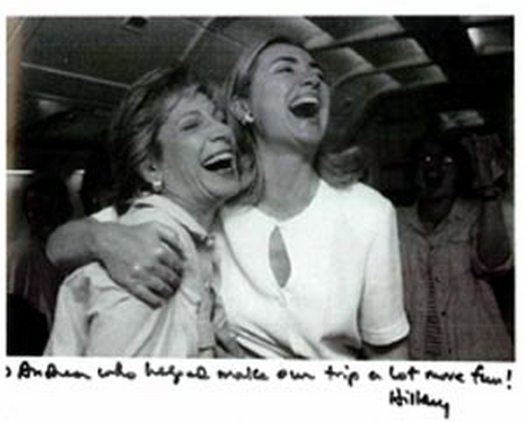 On Thursday, NBC's Andrea Mitchell dismissed Juanita Broaddrick accusations that she was raped by former President Bill Clinton as ‘discredited.’ Ms. Mitchell, who is never one to hide her support of Hillary Clinton, would serve herself well to listen to the advice of her political idol. In December 2015 during a speech at the University of Northern Iowa, Clinton said

“I want to send a message to all of the survivors. Don’t let anyone silence your voice, you have the right to be heard, the right be believed, and we are with you as you go forward.”

The truth is Ms. Broaddrick's story has never been totally disproved nor confirmed - there were only two people in the room when she claims she was raped: Broaddrick and the former POTUS. And, while Broaddrick claims it was Bill Clinton who committed the rape, the issue may be important during the presidential campaign because of Juanita's claim that, three weeks after the rape, Hillary Clinton implied to her that she knew about the incident and that Broaddrick should keep quiet about it.

In a 1999 Wall Street Journal interview, Juanita Broaddrick told the disturbing story about the horrible day in 1978 when she accepted the invitation of Bill Clinton (then running for Governor of Arkansas) to visit his campaign headquarters next time she was in Little Rock. Weeks later, when she was in Little Rock attending a nurses seminar, she called the office to arrange a visit.

Clinton wasn't there for her call but, " an aide who seemed to expect her call, and who directed her to call the attorney general at his apartment. They arranged to meet at the coffee shop of the Camelot Hotel, where the seminar was held." But, the future president said it was too noisy and they should have coffee in her room.

...the conversation did not linger long on the candidate's plans for social reform. For, Mrs. Broaddrick relates, he then put his arms around her, startling her. "He told me, 'We're both married people,' " she recalls. She recalls, too, that in her effort to make him see she had no interest of this kind in him, she told him yes, they were both married but she was deeply involved with another man--which was true.

That other man she was involved with was David Broaddrick, who at the time of that WSJ interview was her husband of 18 years. But, according to Ms. Broaddrick, that didn't matter to Bill Clinton, "who she says, got her onto the bed, held her down forcibly and bit her lips. The sexual entry itself was not without some pain, she recalls, because of her stiffness and resistance. When it was over, she says, he looked down at her and said not to worry, he was sterile--he had had mumps when he was a child."

"As though that was the thing on my mind--I wasn't thinking about pregnancy, or about anything," she says. "I felt paralyzed and was starting to cry." As he got to the door, she remembers, he turned. "This is the part that always stays in my mind--the way he put on his sunglasses. Then he looked at me and said, 'You better put some ice on that.' And then he left."

Her friend Norma Rogers, a nurse who had accompanied her on the trip, found her on the bed. She was, Ms. Rogers related in an interview, in a state of shock--lips swollen to double their size, mouth discolored from the biting, her pantyhose torn in the crotch. "She just stayed on the bed and kept repeating, 'I can't believe what happened.' " Ms. Rogers applied ice to Juanita's mouth, and they drove back home, stopping along the way for more ice.." 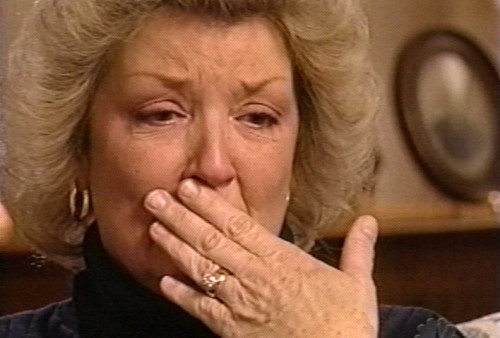 Juanita Broaddrick also told her story to NBC News in 1999, (the first of the two videos below). But that video didn't include the full story as she related in a January of 2016 interview of Ms Broaddrick's on Aaron Klein's weekly show on ABC-AM. She said that, during the 1999 interview, NBC wouldn't let her talk about Hillary.

... during the pre-taped interview, she began to tell Myers about a personal meeting with Hillary Clinton three weeks after the alleged rape in 1978, in which, Broaddrick believes, the future First Lady strongly implied the alleged rape victim had to stay silent about her traumatic experience.

Apparently, an NBC staffer present for the filming rushed in front of the camera, interrupted the prerecorded session, and declared that the allegations against Hillary Clinton could not be included in the interview.

In 2007, Sean Hannity interviewed Broaddrick and allowed her to tell the story NBC wouldn't let her tell (second video below).

If you believe what Ms. Broaddrick says in the interview (transcript below), you will never be able to see Hillary Clinton as the defender of women that she claims to be.

Apparently, three weeks after the incident, a still-shocked Broaddrick was in denial about what happened. She had told her future husband all about the story of the visit to Bill Clinton's hotel room. Almost blind from the shock, she said she attended a private Clinton fundraiser at the home of a local dentist.

Another friend of Broaddrick's had picked up Bill and Hillary Clinton from the airport and drove them to the fundraiser. Before the future first couple entered the room, her driver friend related to Juanita the conversation the Clinton's had during the drive from the airport to the dentist's house.

Broaddrick: They [the Clintons] came in, but just before they did, the driver, who was a -- who had gone to the airport and picked them up came over to me and said that -- he was a local pharmacist in this area and I think he's relocated now in Tefavor (ph), but he told me, he said the whole topic of conversation from the airport was you and are you going to be there?  And...

Hannity:  This is a friend of yours, the driver?

Hannity:  And he told you that?

Broaddrick:  He came over to me and said that, and I really didn't know what to think about that.  The minute they came in the door, I'm standing over in the living room area and I see them come through the kitchen area, and I see her going up to someone and they're pointing at me. And I see him go the opposite direction.  I assumed when they came in if I was still there that he might come up and say something, but she made her way just as quick as she could to me.

Hannity:  And what happened?

Broaddrick:  Well, I almost got nauseous when she came over to me.  And she came over to me, took a hold of my hand and said, "I've heard so much about you.  And I've been dying to meet you" or been wanting to meet you, I can't -- it's just paraphrasing right now. And she said, "I just want you to know how much Bill and I appreciate what you do for him."  And I said, "Well, thank you."  And I started to turn and walk away.  This woman -- this little soft spoken -- pardon me for the phrase -- dowdy woman, that seemed very unassertive, took ahold of my hand and squeezed it. And said, "Do you understand--Everything that you do.  I could have passed out at that moment.  And I got my hand from hers and I left.

Hannity:  How hard was she -- she was really squeezing?

Broaddrick:  Yes.  She was just holding onto my hand.  She didn't -- because I had started to turn away from her.  And she held onto my hand and she said, "Do you understand everything that you do?"  I mean, cold chills went up my spine.  That's the first time I became afraid of that woman.

Hannity:  You interpret that to mean she knew about the incident?

Broaddrick:  I certainly do.  "And thank you for keeping quiet."

Hannity:  How would she have known?

Broaddrick:  I have no idea.  I think that she's -- and I've said this before.  I'm not for sure if she knew that it was nonconsensual.  I'm wondering if she thought it was a forced thing or if she thought it was consensual.  And I really don't know.  At that moment, I don't know her thoughts.  And to this day, I don't.  I mean, why would he tell...

As explained earlier in this post, Ms. Broaddrick's claims of rape have never been totally discredited or totally proved.

It was only six months ago that Hillary Clinton declare that all sexual assault victims "have the right to be heard, the right be believed, and we are with you as you go forward.”

Below are two interviews of Juanita Broaddrick: the top one is her interview with NBC News, and below that is a clip of the interview she did with Sean Hannity.