Hillary: 'Server Will Remain Private,' Has Personal Emails with Bill, Who Doesn't Use Email 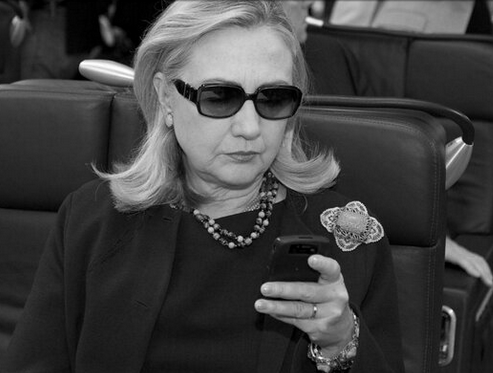 On Tuesday, breaking her nine-day silence on the private email account controversy, former U.S. Secy. of State Hillary Clinton declared that her server will “remain private.”

“The server contains personal communications between my husband and me,” she said.

“And I believe I have met all of my responsibilities and the server will remain private.”

Interestingly enough, according to her husband’s spokesperson, Bill Clinton doesn’t use email.

“The former president, who regularly does use Twitter, has sent a grand total of two emails during his entire life, both as president, says Matt McKenna, his spokesman. After leaving office, Mr. Clinton established his own domain that staff use–@presidentclinton.com. But Mr. Clinton still doesn’t use email himself, Mr. McKenna said.”

Even more, neither of the "grand total of two emails" Mr. Clinton sent were to his wife.

"As president, Mr. Clinton’s first email was a message to John Glenn, the former senator and astronaut who in 1998 was making a return trip to space," writes the WSJ. "His other email was to U.S. troops serving in the Adriatic."

Mrs. Clinton claims to have, with the help of her staff, made "all work-related emails public for everyone to see."

"I took the unprecedented step of asking that the State Department make all my work-related emails public for everyone to see," Hillary said.

"I am very proud of the work that I and my colleagues and our public servants at the department did during my four years as secretary of state, and I look forward to people being able to see that for themselves."

She admitted that, in hindsight, it would have been better if she had used an official government email account:

"Again, looking back, it would've been better for me to use two separate phones and two email accounts. I thought using one device would be simpler, and obviously, it hasn't worked out that way."