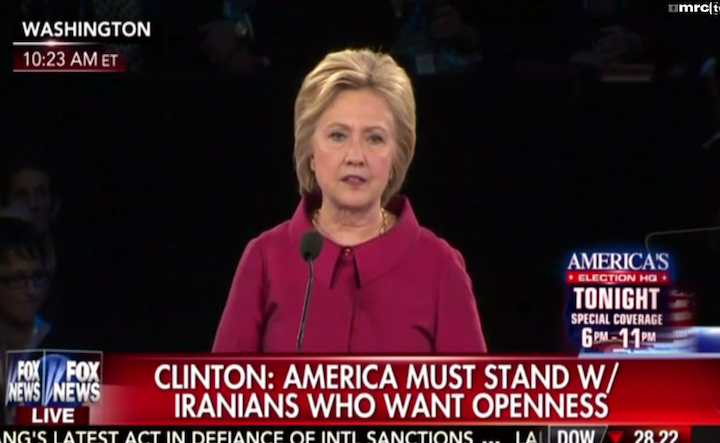 Hillary Clinton certainly threw around some flowery words of friendship during her speech at AIPAC (American Israel Public Affairs Committee) today. If one ignored her past, she may have even seemed like a supporter of the Jewish State. But, the truth is the “red meat” she tossed out at the AIPAC conference wasn’t Kosher; it was nothing but rancid lies. And even when she was being truthful she was omitting the key parts of the story that would make her look...well...unfriendly to Israel.

For example, at one point in her speech, the former secretary of state spoke of the difficulty in getting Israel and Palestine to sit down for peace talks. She left out the part about it being largely her fault.

Per the transcript she issued prior to the speech, Ms.Clinton said:

But inaction cannot be an option. Israelis deserve a secure homeland for the Jewish people. Palestinians should be able to govern themselves in their own state, in peace and dignity. And only a negotiated two-state agreement can survive those outcomes.

If we look at the broader regional context, converging interests between Israel and key Arab states could make it possible to promote progress on the Israeli-Palestinian issue. Israelis and Palestinians could contribute toward greater cooperation between Israel and Arabs.

I know how hard all of this is. I remember what it took just to convene Prime Minister Netanyahu and President Abbas for the three sessions of direct face-to-face talks in 2010 that I presided over. But Israelis and Palestinians cannot give up on the hope of peace. That will only make it harder later.

The Democrat forgot to mention that, during the Bush administration, peace talks were frequent. In fact, at one point, Israel offered a deal that gave President Abbas almost everything he wanted. But, the Palestinian president rejected the offer. The reason talks were difficult during the first Obama administration was that Ms. Clinton decided to make "settlements" an issue.

One of her first actions as secretary of state was to demand a total building freeze in existing settlement communities. Her demand broke a US/Israel agreement made during the Bush administration.  While she said there was never an agreement between Israel and the US about natural expansion of existing settlements,  Elliot Abrams, who negotiated the agreement for the United States, said Ms. Clinton’s contention is simply not true.

What Hillary Clinton she perceived as a minor concession (a “settlement” freeze including no new housing units in existing communities) was for Israel a grave sacrifice. For all intents and purposes Clinton was telling Israeli parents their married children could no longer live in their neighborhoods

This was a major error by the Clinton State Department and it was compounded by the inclusion of Jerusalem in the mix and the constant public berating of the Jewish State by Clinton and Obama. But, mostly, Ms. Clinton. In July 2014, she told CNN's Fareed Zakaria

And I was often the designated yeller. Something would happen, a new settlement announcement would come and I would call him up, “What are you doing, you've got to stop this.”

The biggest mistake of this Clinton policy was the Palestinians, who were afraid of getting another good deal like they did the year before, made the settlements a pre-condition to further talks. All the negotiations during the Bush administration had taken place while Israel was adding housing units to existing neighborhoods. Only Ms. Clinton's insistence had made them a negotiation stopping issue.

In August of 2009, Israeli PM Netanyahu gave Ms. Clinton what she wanted: a ten month-long building freeze. And, again, Secretary of State Clinton blew the possibility for peace talks.

That August, Prime Minister Netanyahu announced a ten-month “settlement” freeze. It was approved by the cabinet and implemented on November 25, 2009 and was to run till September 25, 2010. Despite pressure from the United States, the Palestinians refused to join any talks the first 9+ months of the freeze; they did not come to the negotiation table till September 2010, three weeks before the freeze ended.

As the end of the construction halt approached, the US began to negotiate with Israel to extend the freeze. Based on their experience with Ms. Clinton denying the deal negotiated by Elliot Abrams during the Bush Administration, Israel demanded that any proposal be presented in writing.

The written offer never came because Clinton, the Secretary of State wasn’t negotiating in good faith. Instead Ms. Clinton was playing “Bait and Switch.” As Israel waited for a letter clarifying America’s guarantees in exchange for a proposed building ban for Jewish residents of Judea and Samaria, a diplomatic source finally came forward saying that no such letter was on its way. Hillary Clinton misled Prime Minister Benjamin Netanyahu. The source, a senior diplomat with inside knowledge of Netanyahu’s recent meetings in Washington, said Clinton made commitments when talking to Netanyahu, but later slipped out of her commitments by claiming that she had not been speaking on behalf of U.S. President Obama, who did not give his approval.

Ms. Clinton is 100% correct in the video below from her Monday AIPAC speech when she says that getting the Israelis and Palestinians to sit down and talk was very difficult.  However, the reason it was difficult can be directly tied to Hillary Clinton's actions.