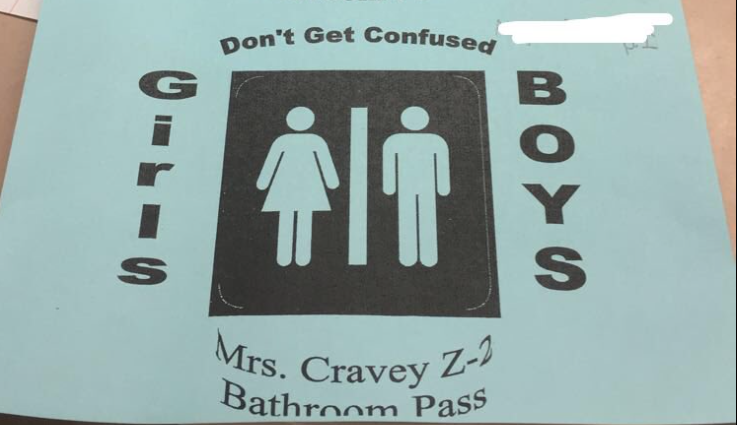 Apparently, snowflakes can exist in warm places like New Mexico, too.

A New Mexico high school teacher is receiving an avalanche of snowflake backlash in the wake of her using “controversial” language on her classroom’s bathroom pass, which included the traditional female and male symbols that typically adorn bathroom signs denoting which bathroom is which. But what got Donna Cravey in trouble was the message she placed about the symbols.

“Don’t Get Confused,” read the pass.

Of course, and right on cue, a bunch of her indoctrinated students were offended by Cravey’s bathroom pass, because they couldn’t find anything else to offend them that day.

“It’s kind of rude,” student Lilly Lelugas said according to KRQE News 13. “If you feel like you should go to a certain place, to use the restroom, you should be able to.”

There have been countless stories about school teachers outwardly telling their students what to believe politically, assignments given out that are severely skewed towards a political ideology or religion and a number of teachers who give students a lesser grade because their thought process didn’t reflect what the teacher believes.

As for the response from Albuquerque Public Schools (APS), KRQE reported the following:

APS responded by quote-tweeting the picture, saying, “Thanks for bringing this to our attention. We’re addressing it.”

KRQE News 13 reached out to APS spokeswoman Monica Armenta who called the passes “inappropriate” and “unacceptable.” She said Mrs. Cravey has been talked to about them.

Just in case you were wondering, here is the tweet sent to APS by Barz:

There’s one thing that can be said in all fairness. What Cravey did, while hilarious, probably doesn’t belong in the classroom. Leave the political back-and-forth for PTA meetings and the student council.