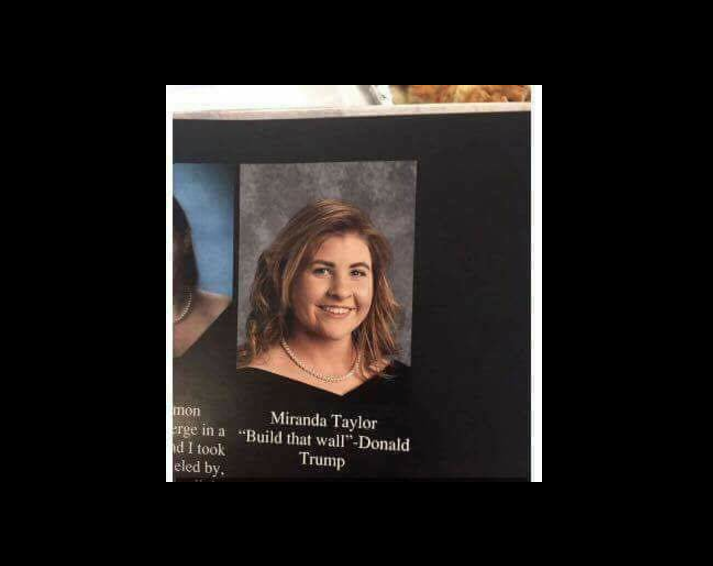 A high school in North Carolina confiscated student yearbooks after one of the students quoted President Trump as her senior quote.

The Charlotte Observer reports administrators at Richmond Early College High School, a public high school in Hamlet, found several quotes, including a quote by the president, to be inappropriate.

One of the allegedly offensive quotes, according to Richmond County school district spokeswoman Ashley-Michelle Thublin, was Trump’s pledge to “build that wall.”

Earlier this week, it was discovered by school administration that Richmond Early College yearbooks had errors and inappropriate comments.

We regret that this incident has occurred and are currently working with the yearbook’s publisher to make corrections.

As a district, we do not and will not tolerate inappropriate conduct toward any of our students.

In each situation, our goal is to provide for the well-being of all of our students and prevent recurrences of inappropriate conduct.

Particular examples of the errors and inappropriate quotes were not specifically named, although the controversy began after the discovery of the Trump quote.

Artney Ellerbe first brought attention to the allegedly controversial Trump yearbook quote. He made a viral Facebook post where he decried the city of Hamlet as “racist” while referencing the yearbook quote.

According to the Charlotte Observer, the school principal confiscated the yearbooks that had been distributed to students, while the rest of the books were never given out. Students who purchased the yearbooks, which ranged between $30 to $39, were reimbursed for their purchase.

According to the Charlotte Observer, although the Trump comment was deemed inappropriate, none of the students who made “inappropriate” comments were punished.