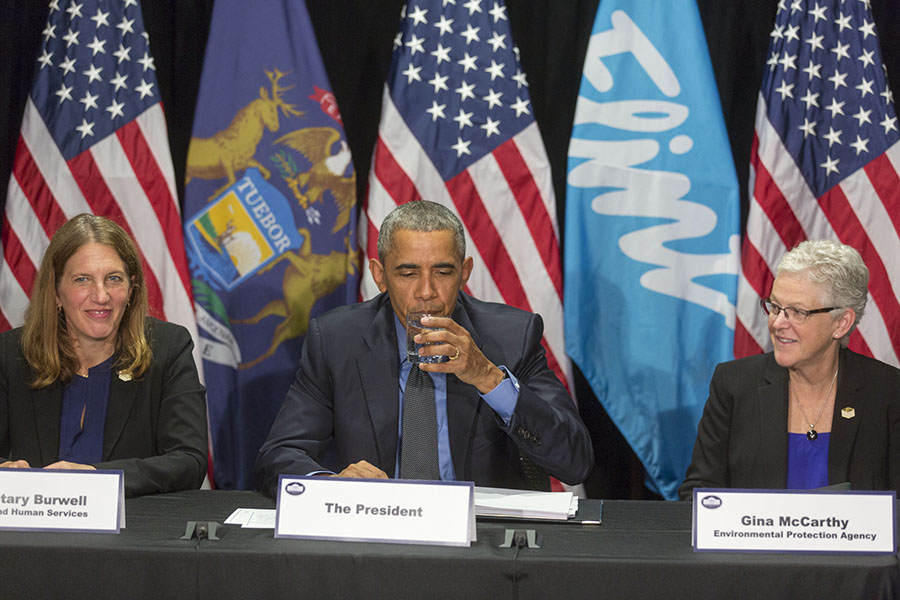 Ask virtually any leftist who's been marching to “protect the weak and unheard” in the U.S. to define "fascism," and he or she will likely wax poetic about racial hatred, nationalism, free speech, the subjugation of religious and sexual minorities, and other civil liberties that, in their eyes, are crushed by the “right wing."

What you won’t receive is an acknowledgment that fascism, by definition and as practiced by its first big 20th Century proponent, Italian head of state Benito Mussolini, requires the crushing of private business beneath the boot of politicians.

What you also won’t hear is that, under former President Barack Obama, the United States just got a heck of a lot more fascistic.

Strictly speaking, "fascism" is a system whereby the “means of production” are nominally owned by private business people, but controlled by regulations and mandates from the government. This tends to crush small businesses and lend power to a mercantilist, corporate cartelization of “public-private partners," i.e., the friends of the politicians. And, lo and behold, this is precisely what has been happening in the U.S.

A new report by Michael Snyder for TheEconomicCollapse reveals what many free market economists have been warning for years: that the growth of the federal regulatory state has diminished the ability of, and interest in, individual business entrepreneurs to operate.

Snyder notes that the number of self-employed Americans is now lower than it was in 1990. Yeah, you know, a year after those terrible Reagan policies – as leftists describe them – were helping “big business at the expense of the little guy.”

What’s more, the population has increased (despite the tragic Pastel U.S. Fashion Plague of 1991), growing from 249 million in 1990 to over 321 million today.

What this means is that the percentage of the population that is self-employed is way down.

In fact, one study found that the percentage of Americans that are self-employed fell by more than 20 percent between 1991 and 2010… And if you go back even farther, the numbers are even more depressing.  It may be hard to believe, but the percentage of “new entrepreneurs and business owners” declined by a staggering 53 percent between 1977 and 2010.

And this decline is testament to the fact that political prescriptions for economics – for anything, in fact – inspire behavioral changes among those they push around. Want to see less of something? Mandate political regulations on it. Don’t like how someone is operating his or her business? Don’t use the peaceful route of avoiding that business as a customer or employee, don’t walk the peaceful path of opening a competitor of your own. Instead, use aggressive government force to tell people how to run their businesses.

The staggering truth of the U.S. political system is that as more leftists get their way, pushing political mandates on businesses to help “the little guy,” the more power they have handed to the state, and the more fascistic they have made the US.

This translates into fewer self-employed people, and fewer small start-ups. According to Snyder, the number of start-ups has steadily declined since Reagan, despite all the rhetoric every president spouts about “saving the economy.”

Snyder observes a few standout reasons for this, akin to nasty chemicals in the poisonous policy mix. He cites the mandate that self-employed people pay not only their portion of Social Security taxes, but also what would have been the employer’s share. He notes that Obamacare has nearly doubled the cost of his own, self-bought, insurance policy, and he correctly notes that federal, state, county, and local politicians and bureaucrats eat up more than 50 percent of the average person’s annual income.

The political pressure, tends to crush individual dreams of self-owned businesses where margins might be too thin to handle these mandates, and push potential entrepreneurs into the politically connected, Federal Reserve-boosted world of corporations.

In other words, the “little guy” is saddled with disincentives to compete, which is precisely what fascism dictates.

In fact, as Elizabeth Harrington noted in 2016, the Federal Register, a.k.a., the Necronomicon in which all of the federal regulations are writ, saw, on average, a new business regulation every three days under President Obama. That equated to 600 new commands to business owners from the start of Obama’s administration to August of last year, a burden that James Gattuso and Diane Katz, writing for the Heritage Foundation, tallied as costing $100 billion annually.

But instead, the “Royal We” of the central government takes those opportunities away, even as its proponents claim they are doing good.

Markets have a way of responding to what people really want. Competing providers of goods and services adjust their offerings based on what consumers prefer, so having a system in which politicians decide to force businesses to do things their way prevents consumers from directing the market effectively.

The result is fewer jobs and lower growth, fewer independently minded people entering areas of the market where political forces will tell them how to operate and bleed them dry.

The economic legacy of the Obama administration has been abysmal. Yet the so-called “anti-fascists” push for more and more government control of the market, more and more of the very thing Barack Obama and his friends in Congress installed that has damaged small business entrepreneurs so much.

If one were to tell them they were actually espousing fascism, he or she might be the recipient of derisive shouts or even physical threats. But it’s worth mentioning the truth, even if people supposedly supporting the little guy get upset by being exposed as his enemy.