Even among the Hollywood cult actor Jim Carrey is out there. So, it even though it should come as no surprise that Carrey inserted himself into a story in the craziest way possible, what the "Ace Ventura: Pet Detective" star tweeted out Monday evening is shocking enough.

Carrey took to Twitter to call out President Trump in the wake of the school shooting in Parkland, Fla. last week. He even tweeted at student survivor turned activist Cameron Kasky. While the kid agrees with Carrey's heinous tweet, to tweet something like this to a survivor of a school shooting is at best insensitive. 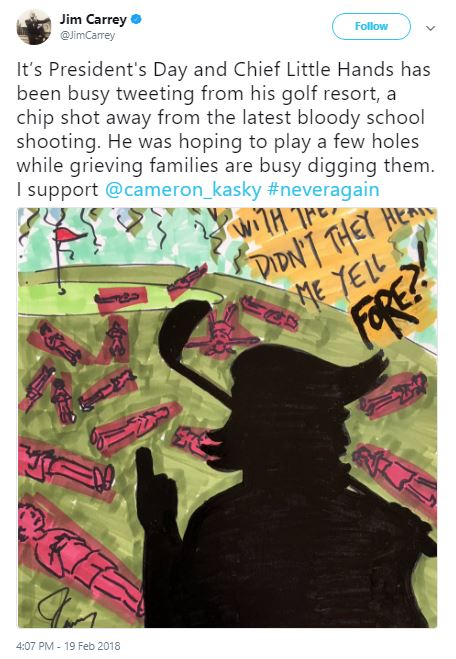 Did you see the signature? The artist wanted everyone to know that this fever dream of a painting is a Jim Carrey original. Sick.

I don't know about you, but I would put this on par with unemployed stand-up comedian Kathy Griffin's photo stunt in which she posed with the blood-covered, decapitated fake head of Trump. I mean, Carrey basically accused Trump of killing children because he likes golfing. While golfing - no matter which president does it - should take a backseat to pertinent issues, to make the connection that Trump's perceived preoccupation with golf in some way precipitated a school shooting isn't just disgusting, it's irresponsible.

For those that don't know, Kasky has been very outspoken about gun control since the last week's shooting occurred. 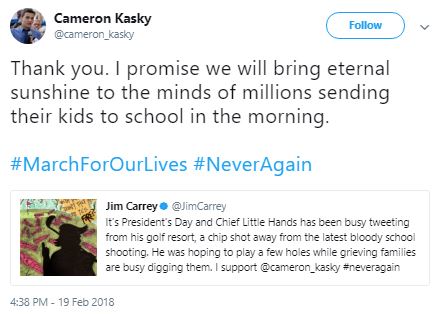 Kasky's "eternal sunshine" comment was in reference to one of Carrey's films, "Eternal Sunshine of the Spotless Mind."

Listen, I get the kid is scared of these school shootings happening. What rational person wouldn't be? But, to say that something like these horrible incidents can be completely prevented from happening ever again with way stricter gun laws is ignorant in the sense that if someone is dedicated enough to hurting a crowd of people, they will find a way.

Be it by way of gun, knife, car or truck, these maniacs will find a way. That's way scarier than continually blaming guns instead of the people that use them.