If you’re a person that looks hard enough for something, odds are you’ll most likely find it.

That seems to be the case with a recently taken down ad from beer maker Heineken in which some people have called “terribly racist.”

In the commercial, a non-white bartender spots a non-white woman at the other end of a very long bar. The bartender then pops open a bottle of Heineken Light beer and slides it directly past three black people — as well as indirectly by a number of other people — ending with the tag line, “Sometimes, lighter is better.”

To see the ad in question, watch below:

Of course, what would something like this be without the social justice race-baiters chiming in?

Chance the Rapper took to Twitter to voice his disgust with the ad, and while he said he’s not calling for a boycott of Heineken, he just couldn’t understand how you could ignore an ad like this. 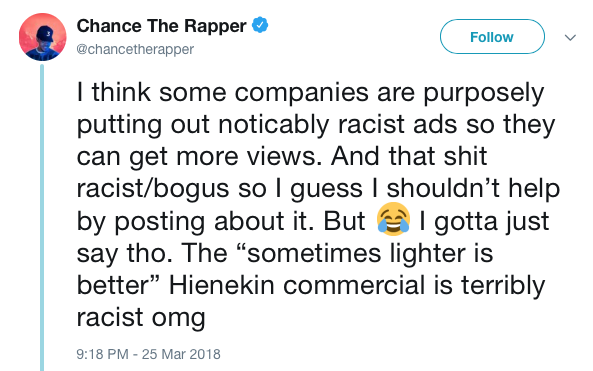 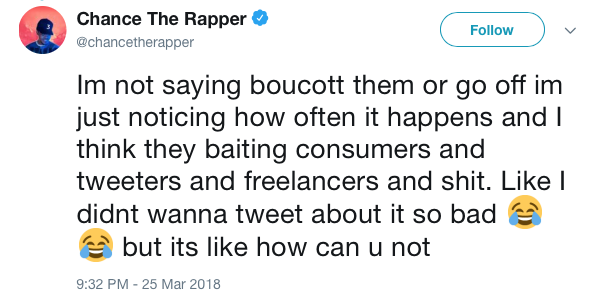 Chance the Rapper’s own Twitter followers thought he was reaching with his claim:

Even though I wouldn’t put it past the ad agencies who come up with these commercials — with the politically correct climate we currently live in — why would companies deliberately put out ads they know will be construed as racist when they’ll just eventually take them down anyway?

Maybe I’m naive, but unless you’re obsessively looking to be offended — whether it involves racism, sexism or whatever other “ism” — isn’t it possible that ads like the one in question didn’t have the intent to offend?

Predictably, Heineken took down the ad and issued a statement of contrition.

“While we feel the ad is referencing our Heineken Light beer, and that light beer is better than other high-calorie options -- we missed the mark, are taking the feedback to heart and will use this to influence future campaigns," said Heineken USA spokesman Bjorn Trowery.

Could this ad possibly be interpreted as racist? Sure, if you’re looking for it.

Sometimes it’s just about the beer, my dude. Reading more into it reveals your own prejudices, and on occasion makes you look dumb.