Half of all American Millennials -- i.e., anyone born somewhere between 1980 and 2000 -- now say they’d rather live in a socialist or communist country than a capitalist one.

To remind, communist regimes are responsible for killing around 85 to 100 million people worldwide. Socialism has done such a bang-up job for Venezuelans that they’re forced to stand in hours-long lines just for basic groceries and have resorted to killing zoo animals for food.

If that weren’t bad enough, more than one in 10 American Millennials say they view mass murderers Joseph Stalin and Kim Jung Un as "heroes." Marketwatch explains:

According to the latest survey from the Victims of Communism Memorial Foundation, a D.C.-based nonprofit, one in two U.S. millennials say they would rather live in a socialist or communist country than a capitalist democracy.

What’s more, 22% of them have a favorable view of Karl Marx and a surprising number see Joseph Stalin and Kim Jong Un as “heroes.”

Seriously, here was the breakdown: 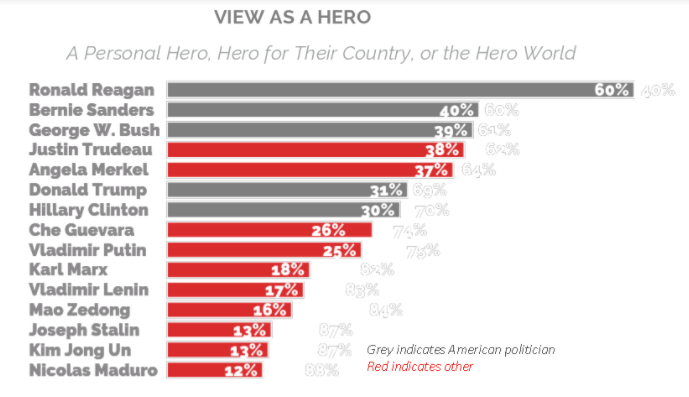 Never mind that Kim Jung Un is currently starving his people to death while he gorges himself on imported cheese like a fat Asian Marie Antoinette, or that Joseph Stalin was responsible for systematically exterminating more people than Adolf Hitler. Those are just details.

True to form, roughly two in three Millennials also say the richest Americans don’t pay their fare share in taxes (despite the fact that the top 1 percent pay nearly half of all federal income tax, the top 20 percent account for nearly three-quarters, and roughly half of Americans pay nothing at all). Four out of five Millennials say wealth inequality is a major problem, while a slight majority 53 percent say the American economic system isn’t working for them.

Then again, it’s entirely possible that this newfound love of socialism and homicidal communist dictators is due to the fact that millennials are largely ignorant on the subjects.

According to Marketwatch, a recent YouGov poll found that a whopping 71 percent of surveyed millennials can’t actually define “communism” correctly. And when Jimmy Kimmel’s team took to the streets back in 2016 facetiously asking Americans to congratulate North Korean dictator Kim Jung Un on a successful hydrogen bomb test, they found more than a few really stupid people who did so quite happily, clearly having no clue who Kim Jung Un actually is.

Thankfully, a majority 60 percent of polled Millennials said they view Ronald Reagan as a hero – probably because they at least recognize his name.