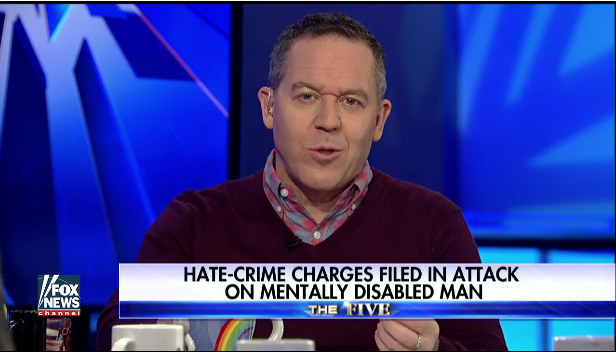 Greg Gutfeld of Fox News' "The Five" took to the airwaves last night to give his two cents on the disgusting attack broadcast on Facebook Live earlier this week, in which four black teens are seen beating and torturing a mentally disabled white male.

Gutfeld argued that “hate crime laws suck,” because people -- and the media -- spend more time debating the arbitrary definition of a "hate crime" instead of focusing on the actual crime itself.

"It's black on white crime, there's no hijab on the victim, so it just doesn’t fit the media narrative," he said.

This undeniably evil crime shouldn’t be dividing us over how it's classified, but should instead unite us in a shared horror and the need for what Gutfeld calls a "clear-eyed punishment."

"A violent crime is a hate crime, no matter who the victim is," he said.

Watch the full clip below: