'Greater Idaho?' Citizens Want to Move Parts of Oregon & Calif. to Idaho to Escape 'Shackles of Living in a Blue State'

Especially over the last decade or so, people in certain states have grown tired of large urban centers — typically controlled by the left — dictating how the rest of the citizens in their states live. We’ve seen calls for Cook County, where Chicago resides, to become its own state, and calls for California to be split up. We’ve even seen calls for Texas to secede from the U.S. in the past.

But, with cities like Portland, Los Angeles and San Francisco becoming havens for extreme far-left policies, people that make up more than half of one of the West coast states have sounded the call to join another state instead of becoming a state of their own.

They’re calling it “Greater Idaho.” Under the plan, the leaders of which admit that it most likely won’t happen, the majority of the state of Oregon and a large chunk of Northern California would be absorbed into Idaho, creating “Greater Idaho.”

A map of the proposed Idaho expansion shows that if plans ever came to fruition, Idaho would also have a decent portion of the Pacific coastline (Image: Screenshot/Move Oregon's Border for a Greater Idaho Facebook page): 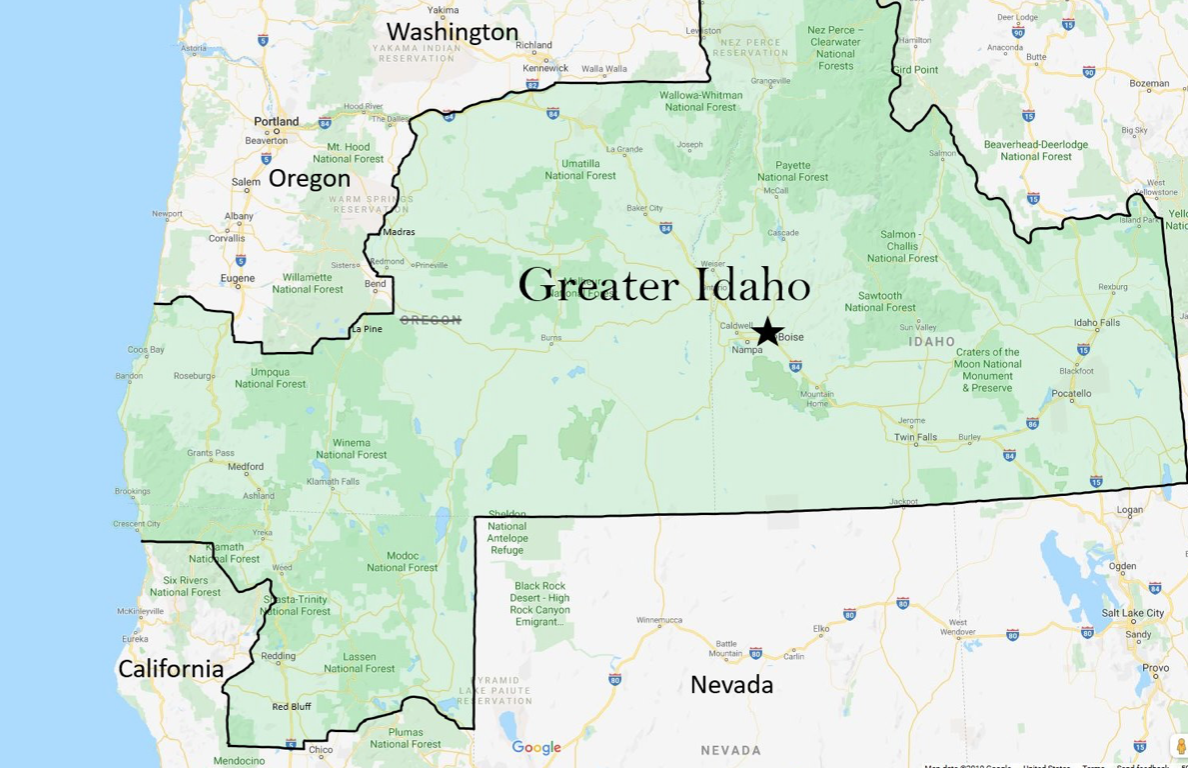 Mike McCarter, one of the leaders of a group that calls themselves “Move Oregon’s Border for a Greater Idaho,” says that despite the move being unlikely to happen, he feels a groundswell of support for the idea.

“We’re picking up momentum,” McCarter says, according to Oregon Live. “It takes a lot of oomph to get something like this started. I call it a peaceful revolution.”

McCarter told Oregon Live that instead of doing what has traditionally been done — making appeals to an entire state — he feels that executing a more focused appeal could garner more support than efforts in the past.

According to Move Oregon’s Border for a Greater Idaho’s “About” section on their Facebook page:

This proposal is different from secession because it is simply a shift in borders that does not affect the balance of power in the US Senate. It does not create a new state or increase the number of states[…]

The majority party in the Oregon legislature is expected to be willing to let “Trump-voting, low-income counties” to leave the state.

Law professor at the University of Idaho Shaakirrah Sanders said the proposal definitely is a long way off because of all the legislative hurdles that would need to be crossed off before a plan like “Greater Idaho” could become a reality.

“Consent of the legislatures of all of the involved states would be needed,” Sanders told KTVB -TV, “and the consent of both houses of Congress.”

In order for the “Greater Idaho” plan to be put to a vote this November, a certain number of signatures need to be gathered from each county affected. The deadline to procure the signatures is August 5th.

For a more complete local view of the story, watch the video from KTVB - TV in Boise, Idaho below: