Following the deadly chemical weapons attack on a Syrian town near Damascus last week that left dozens of civilians killed, including women and children, Sen. Lindsey Graham (R-S.C.) says that President Trump “has all the authority he needs” to take military action against the Assad regime.

He said in a Thursday interview with Fox News that Trump doesn't need the approval from Congress to authorize an attack on Syria.

“This president can take on a rogue regime like Assad who violated the chemical weapons ban. He can come to the aid of our friends in Israel who are facing threats from Syria. He has all the authority he needs as commander-in-chief,” said Graham.

“And if the Congress doesn’t like this military action, you can defund it, but you can’t have 535 commanders-in-chiefs,” he added.

The U.S. has not ruled out military action in response to the Apr. 7 chemical attack, though it seemed as though an attack on Syria was imminent after Trump tweeted Wednesday the following message in response to threats from Russia:

Russia vows to shoot down any and all missiles fired at Syria. Get ready Russia, because they will be coming, nice and new and ‘smart!’ You shouldn’t be partners with a Gas Killing Animal who kills his people and enjoys it!

Trump tweeted on Thursday that an attack “could be very soon or not so soon at all.”

“In any event, the United States, under my Administration, has done a great job of ridding the region of ISIS. Where is our ‘Thank you America?’” he added. 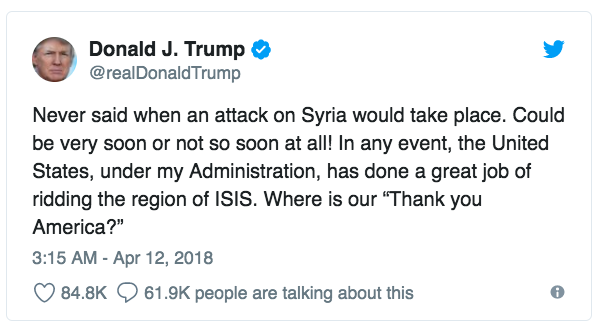