Here’s an ugly Christmas sweater for you.

PETA in gruesome fashion has just released a Christmas sweater featuring a 3D “bloodied and bruised” plush sheep to “raise awareness of the ‘bloody truth’” regarding the wool industry.

The pricey $150 “Wool Hurts Ugly Holiday Sweater” has the typical Christmas color scheme of red, green and white, and has an off-putting plush sheep that jets out from the front and back.

The item’s description reads as follows:

PETA’s limited-edition ‘Wool Hurts’ Ugly Holiday Sweater puts the ugliness of the wool industry front and center. Emblazoned with the words ‘WOOL HURTS’ and featuring a 3D bruised and bloodied plush sheep protruding from the front to the back of the sweater, you’re guaranteed a chance to join in on the holiday fun while making a statement for animals.

And according to Fox News, "The controversial animal rights organization calls the look 'a show-stopping, conversation-starting' feature that goes 'where no sweater has gone before' and promises to give the sweater's wearers “a chance to join in on the holiday fun while making a statement for animals at the same time.”

PETA in the item's description goes on to say that the sweater is part of their “campaign against the wool industry, where workers have been caught beating, kicking, stomping on, and even killing gentle sheep in shearing sheds.”

“With the help of celebrities such as Billie Eilish and P!nk, PETA is calling on shoppers (and retailers like Forever 21) to help sheep by switching to cruelty-free knits,” writes the organization.

Eager beavers will have to wait until Nov. 25 for the sweater to ship, according to PETA's shop website. 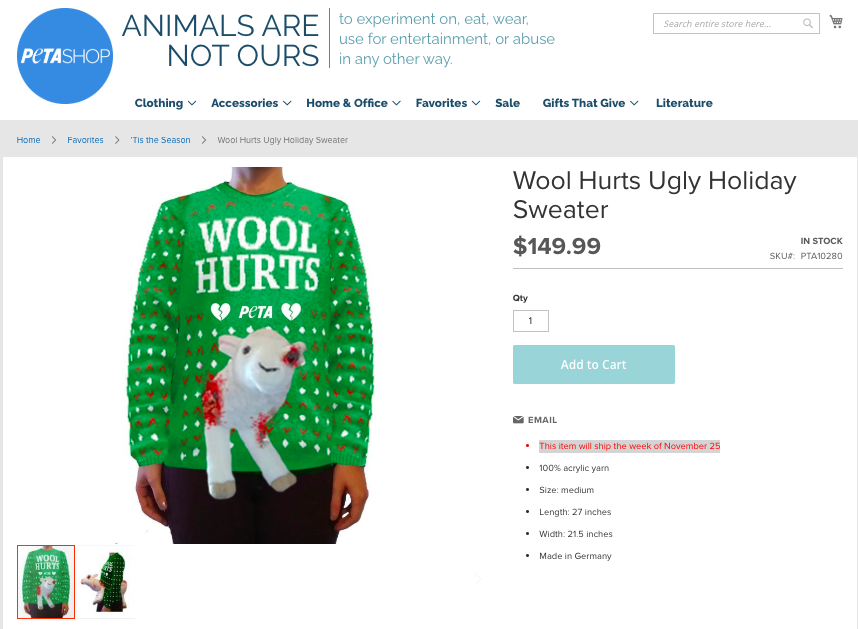 PETA is also selling an inflatable turkey lawn ornament that reads, “Gobble Veggies, Not Turkeys. Go Veg!” The ornament was originally $79.99 but is now on sale for $45.49. We wonder why...

Let’s see if PETA comes up with any other ideas to try to ruin the holidays this season.