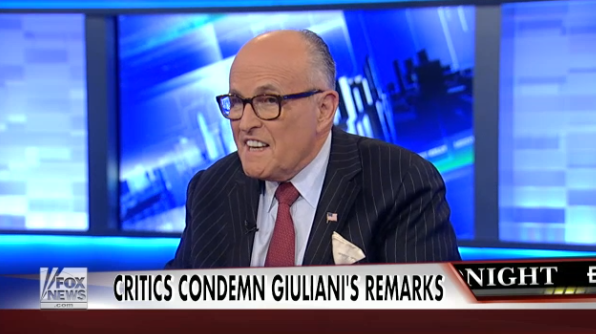 “I know this is a horrible thing to say,” Giuliani began, “but I do not believe that the President loves America…”

Following the event, Giuliani received a great deal of criticism for challenging the President’s patriotism.

On The Kelly File Thursday night, Megyn Kelly asked the former NYC mayor if he wanted to apologize for his comment.

Giuliani doubled down in response,

Kelly suggested that the fact that he and Obama have different views or approaches to foreign policy doesn’t mean that one is less patriotic than the other.

“To say that he doesn’t love America, I mean, that he could view foreign policy as a Democrat might view it and through a different lens than you or a Republican might see it, you can understand the differences between you,” she said.

“But to condemn his patriotism? To question his love of America?”

Giuliani insisted that he was not condemning the President’s patriotism, but instead sought to hear more from Obama about how “exceptional” the United States is.

“A lot of liberals don’t believe in American Exceptionalism, but that doesn’t mean they don’t love America.”

Giuliani went on to say that the only thing that might change his mind is if Obama calls Muslims “barbarians” along with Christians following the President’s remarks comparing ISIS terrorists in the present to the Christian Crusaders from over 1,000 years ago.

“Until he does that, I will have doubts about his emotions, his feelings, his attitudes, and the way in which he developed,” he said.

In an interview with Politico, Giuliani explained his position:

“I’m not sure how wrong the Crusades are. The Crusades were kind of an equal battle between two groups of barbarians. The Muslims and the crusading barbarians. What the hell? What’s wrong with this man that he can’t stand up and say there’s a part of Islam that’s sick?”