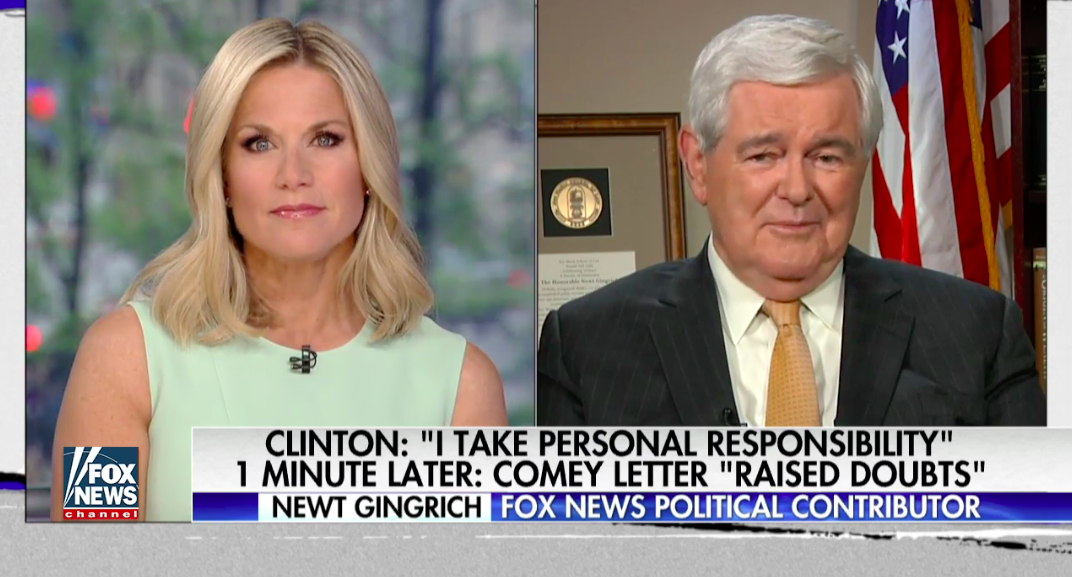 Former Speaker of the House Newt Gingrich had some fiery words for Hillary Clinton following her interview at a Women for Women International event on Tuesday, where she offered attendees a telling explanation for her loss to President Trump in the 2016 election.

Clinton initially took “absolute personal responsibility” for her election loss, then turned around less than a minute later and blamed everything and everyone else – from FBI Director James Comey to WikiLeaks, Russian intervention to misogyny.

She even went so far as to claim that if the election were on October 27th, before Comey issued the letter to Congress about then-newly discovered emails and WikiLeaks released scandalous campaign communications, she would have been president.

"The reason I believe we lost were the intervening events in the last 10 days,” said Clinton. “I was on the way to winning until the combination of Jim Comey’s letter on October 28 and Russian WikiLeaks raised doubts in the minds of people who were inclined to vote for me, but got scared off.”

“But, as Nate Silver—who, you know, doesn’t work for me, he’s an independent analyst, but one considered to be very reliable—you know, has concluded ... that if the election been on October 27th, I’d be your president.”

Gingrich in an appearance on Fox News Tuesday night said watching Clinton explain losing the election was “like watching a car wreck in slow motion.”

"It's like watching a car wreck in slow motion," he said. "She can't come to grips with reality.”

“The number one problem with the Hillary campaign was Hillary Clinton,” Gingrich fired.

He went on to praise President Trump as “an amazingly better candidate than any Democrat thought he could be.”

“He won, she lost, and it’s kind of sad to watch her repeat the, ‘somebody else made me do it,’ kind of analysis,” said Gingrich.

Check out his remarks in “The Story with Martha MacCallum” segment below.