Ah, the Chicago Teachers Union (CTU). As if it weren’t enough that their colors are red and black, coupled with their use of the communist clenched fist on many of their banners, CTU has been giving teachers “civil disobedience training.”

The CTU website revealed that they offered teachers lessons in “civil disobedience” while children remained out of school for a sixth day last Thursday. Including Monday morning, the teacher’s strike has reached its eighth day.

According to the website, following dissatisfaction in negotiations with Chicago Mayor Lori Lightfoot, the union listed a two-hour tutorial on “Civil Disobedience Training” for teachers.

“To combat the mayor’sstonewalling, we may needto ratchet up pressure.Learn the lessons of thecivil rights movement atthis civil disobediencetraining,” the CTU posting read.

If you’re having difficulty reading what the CTU posted, don’t adjust your computer or cell phone screen. The quote above is literally what was printed on the site.

This is of course my own opinion, but if you’re teachers looking for more money — among other perks, including reduced class size — it might behoove you to prove that you’re worth those increases and perks by using a spacebar every now and then. I just hope it wasn’t a current or former English teacher that wrote those two sentences.

Just in case, for those that might not believe it, here's a screenshot of the posting: 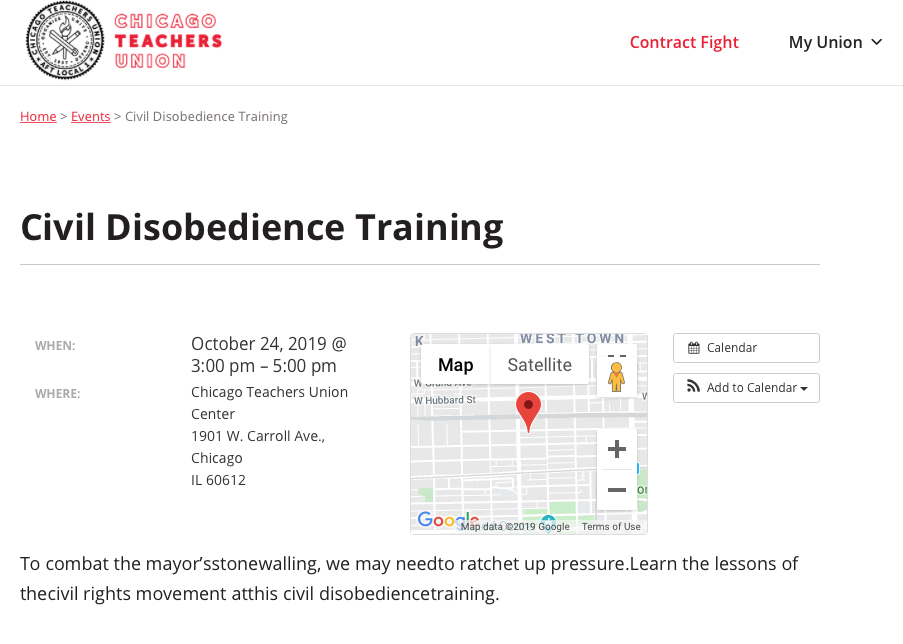 Basically, what the unions have been trying to school the teachers on is acting like a petulant child who repeats the same two lines over and over again until they get their way.

The training session signals that members of the CTU and SEIU Local 73 are planning to escalate their demonstration efforts — and potentially face arrest. During the presentation, led by an SEIU Healthcare official and a staffer for presidential contender Sen. Bernie Sanders’ political team, strikers were coached on blocking traffic and shutting down building lobbies[…]

Despite members agreeing that any protests would remain nonviolent, they were all prepped for being arrested as part of future demonstrations. They were told to avoid carrying anything that isn’t necessary and advised to use the restroom and bundle up in the case they’re locked up.

Between the CTU and the Service Employees International Union (SEIU), union leaders seem to enjoy conflict — in some cases even threatening action should anyone else besides them show aggression in any way.

“Any retaliation that CPS engages in against a member is something that we will bring the full force of the union forward to defend them,” a spokesperson for the CTU said, according to the Sun-Times.

Grow up. Do that and then maybe they’ll be qualified to teach children.