Over the weekend, Georgetown Professor Carol Christine Fair tweeted that "entitled white men" should have their corpses castrated and then be fed to pigs, a move that apparently ended up costing her Twitter's coveted blue checkmark.

Academia, which once seemed to be the expensive but necessary ticket to the middle class, seems to be an increasing hotbed of extremism and intolerance for opposing views. Fair's tweet linked to a video of Republican Senator Lindsey Graham defending Supreme Court Justice nominee Brett Kavanaugh. 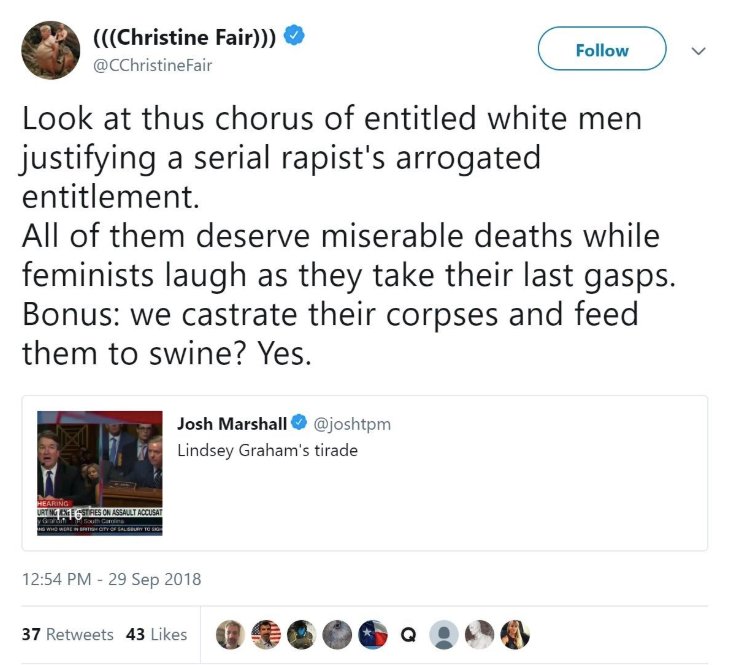 While the Brett Kavanaugh ordeal is understandably something that stirs up a great deal of pain and disagreement about fundamental principles, whether it's the defense of victims of trauma among Democrats or protection of due process and the presumption of innocence among Republicans, the prospect of castrating one's opposition, gleefully rejoicing over the prospect of their painful deaths, and feeding them to farm animals seems to sadly portray how polarized our politics have become, especially among the elites and intelligentsia of our society.

Georgetown University in a statement to the Daily Caller's inquiry about this defended her right to free speech while saying they do not necessarily support her views.

“The views of faculty members expressed in their private capacities are their own and not the views of the University. Our policy does not prohibit speech based on the person presenting ideas or the content of those ideas, even when those ideas may be difficult, controversial or objectionable. While faculty members may exercise freedom of speech, we expect that their classrooms and interaction with students be free of bias and geared toward thoughtful, respectful dialogue.”

One might consider it comical to associate Fair's statement as something which could lead to "thoughtful, respectful dialogue" of any kind. While Georgetown is not necessarily defending her tweet here, one must wonder how quickly they would have fired a conservative professor for making a statement anywhere near as belligerent.

It is also worthy to note that free speech's limit is when it increasingly resembles a call to violence. Ironically, many far-left protestors of speakers like Jewish conservative Ben Shapiro have specifically disrupted his events with riots, under the presumption that his speech and ideas could hypothetically lead to his supporters committing "nazi" violence and "hate crimes."

Fair has a troubled history of intolerance against those of opposing ideas in general, which is highly concerning considering her elevated position in academia. She came under scrutiny in 2017 for sending "hateful, vulgar" messages to former Georgetown professor and colleague Asra Nomani, who claimed Fair had started harassing her after she admitted to voting for Trump. Nomani made headlines in January of 2017 for being a Muslim professor who famously voted for him and had to request the school to intervene and halt Fair's continued harassment campaign.

Fair had targeted her with statements like “I’ve written you off as a human being. Your vote helped normalize Nazis in D.C. What don’t you understand, you clueless dolt?” and “‘F**K YOU. GO TO HELL."

Fair has also been detained by German officers for disparaging then as "Nazi police" at an airport in Frankfurt, Germany.

It is important to note that during Trump's presidency, more and more professors of this general mindset have been revealing themselves, and that academia is the filter through which the powerful and influential of society must pass. This story, while shocking, is increasingly becoming the "new normal," the new expectation of "well of-course academia is like that."

The same problem exists in the media as well. One of New York Times' latest hires, Sarah Jeong, had previously tweeted statements like, "White people have stopped breeding. You'll all go extinct soon. This was my plan all along." or "Are white people genetically predisposed to burn faster in the sun, thus logically being only fit to live underground like groveling goblins." The concern over the moral legitimacy of modern information gatekeepers has become increasingly popular among both conservatives and centrists alike.

The idea off sending one's offspring to college and having their minds molded by people who are this intolerant is one that has many parents increasingly concerned, regardless of their personal political views. No matter how heated debates and trials may become, Americans should try to maintain some level of civility with their opposition.