George Takei, one of the foremost supporters of the “listen and believe” narrative when it comes to sexual assault accusations, is claiming “Russian bots” are responsible for sharing stories about the sexual assault allegation against him.

On Friday, the Hollywood Reporter reported that model Scott Brunton claims he was sexually assaulted by Takei in 1981, when Brunton was 23 and Takei was in his 40s. At first, Takei initially addressed the situation by saying it simply did not happen (similar to what Kevin Spacey said regarding the allegations surrounding him):

I'm writing to respond to the accusations made by Scott R. Bruton. I want to assure you all that I am as shocked and bewildered at these claims as you must feel reading them. /1

But I do take these claims very seriously, and I wanted to provide my response thoughtfully and not out of the moment. /3

Brad, who is 100 percent beside me on this, as my life partner of more than 30 years and now my husband, stands fully by my side. I cannot tell you how vital it has been to have his unwavering support and love in these difficult times. /5

Thanks to many of you for all the kind words and trust. It means so much to us.

In a now-deleted tweet on Sunday, however, Takei addressed the situation again by posting a chart that he claims shows “Russian bots” were “amplifying” the stories about the allegation against him: 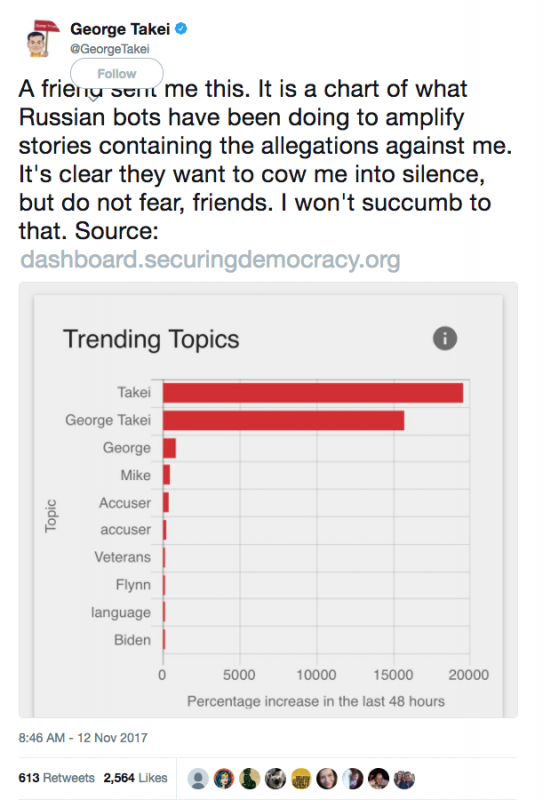 Takei also reportedly tweeted that when he criticized Russian president Vladimir Putin, “Russian bots” attacked his Facebook page. According to Takei, he is “accustomed to their practices.”

Takei blaming “Russian bots” for perpetuating the claims against him are in stark contrast to Takei’s vocal beliefs on sexual assault:

If you ever wonder why sexual assault victims don't come forward, just look what's happening now to those who do.