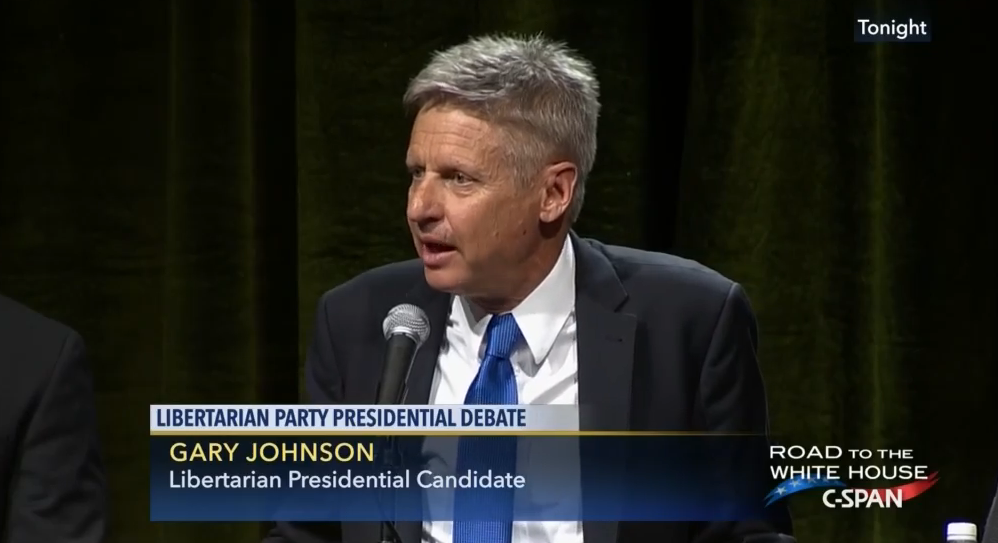 During the Libertarian Party presidential debate at the Libertarian National Convention, prospective candidates were asked whether it’s a problem that 83 percent of law professors are allegedly Democrats.

While the other candidates mocked Democrats and the law profession, Johnson said, “Well, I think that 83 percent of all professors are Democrats. And how big of a problem is that? You know what, I think Libertarians probably agree with those professors about 75 percent of the time.”

The leftist college professors Johnson claims Libertarians agree with are the same professors who routinely try to shut down dissenting views.

Soon after winning the nomination, Johnson wasted no time trying to appeal to radical leftists.

While speaking on CSPAN on Tuesday, Johnson pleaded for Sanders supporters to consider his candidacy. Johnson said, according to his results from the online quiz on ISideWith.com, he agrees with Sanders on 73 percent of the issues.

“Of course, I side with myself 100 percent of the time, but interestingly, of all the presidential candidates, I next side with Bernie Sanders at 73 percent,” Johnson said.

“Now, that’s the side of Bernie that has to do with pro-choice, pro-marriage equality, let’s stop with the military interventions, that there is crony capitalism, that government isn’t really fair when it comes to this level playing field… legalize marijuana,” Johnson explained. “Look, 73 percent of what Bernie says, I agree with.”

“We come to a T in the road when it comes to economics. I would really argue that if we absolutely had a fair system of economics, that free markets… that we would do a lot better than going down the path of socialism,” he continued.

Johnson even went as far as to say Libertarians agree with socialism—as long as it’s voluntary.

“Look, libertarians agree with socialism as long as it’s voluntary,” Johnson said. “But when it’s forced, that’s tyranny. So that’s the libertarian perspective.”

“But I think there’s so much in common that just, factually speaking, take a look," he adde. "Take a look Bernie Sanders supporters. Take a look at who you next side with.”