Gallup Poll: Satisfaction with Governance Under GOP on the Rise

According to a new Gallup poll, the majority of American adults are still dubious regarding how well they think Trump's administration is running their country, yet their overall approval has risen 10 percentage points since last year, rising to 38%.

To put these numbers in context, this overall American approval/satisfaction rating of 38% has been more or less consistent since the 37% historical average from 2001. There was a noticeable dip in satisfaction however during 2011 when the US credit rating was slashed in response to a deal raising the federal debt limit. 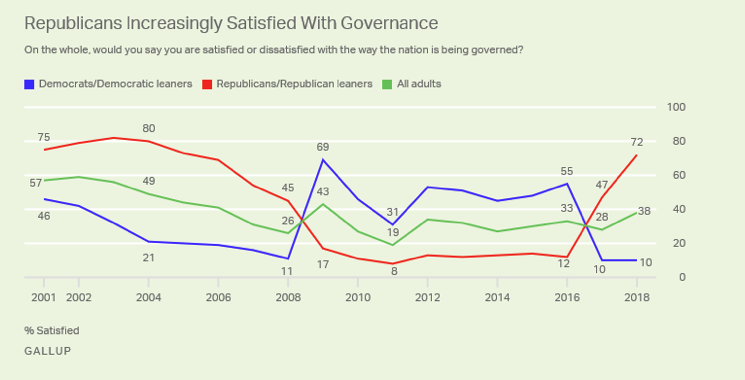 While the current GOP satisfaction level is as high as it was during George W Bush's presidency in 2005, it is still significantly lower than it was during the 82% satisfaction rating during his first term in 2003, which is an all-time high for the party as a whole.

Gallup's results are based on telephone interviews conducted in their Sept. 4 - 12 Governance poll.