Gallup Poll: Less Than 50% of Americans Now Approve of Obamacare

Americans’ approval of the Affordable Care Act - also known as "Obamacare" - has dropped significantly since last year, falling below 50 percent according to a recent Gallup Poll.

In April 2017, approval reached at an all-time high 55 percent. But as of November 2018, the approval/disapproval rating is almost split right down the middle, with 48 percent approving the ACA and 47 percent disapproving.

After combining the responses of these two questions, Gallup found that 64 percent want the ACA kept as it is, while 46 percent say they want to see changes made to the 2010 healthcare law. 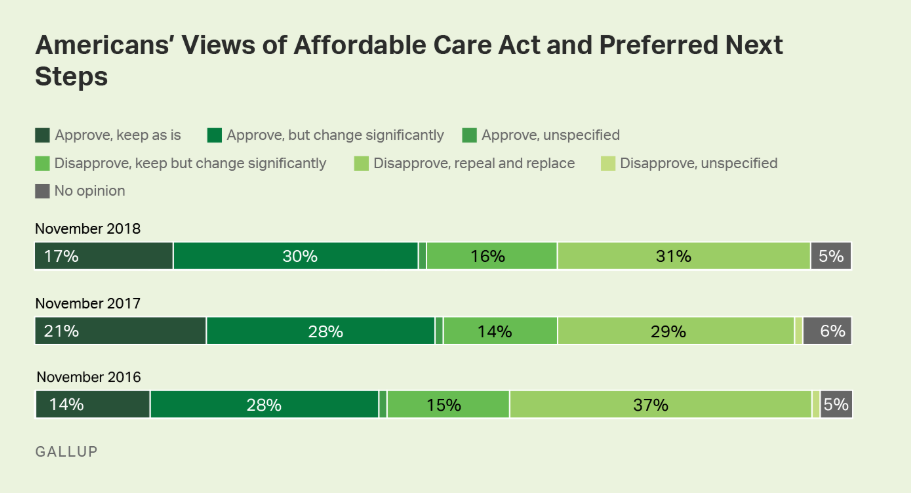 Gallup reports that even though a GOP-held Congress failed to repeal and replace the ACA in 2017, a large majority of Republicans still oppose Obamacare, with 65 percent disapproving of the law.

“Rank-and-file Republicans remain firmly supportive of efforts to dismantle the law, but this year's Democratic electoral gains in the U.S. House of Representatives virtually guarantee it will not be repealed in the next Congress.”

“Still, with less-than majority-level approval of the law and 46% of the public calling for significant changes to it, lawmakers clearly have some work to do in fixing the nation's healthcare system to their constituents' satisfaction.”