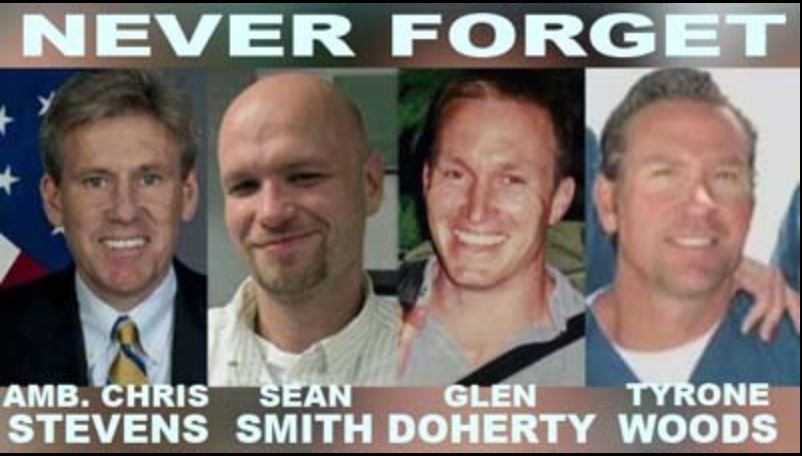 The official report of the House Select Committee on Benghazi offered proof of what America already knew about the attack - but, more importantly, added shocking details about the lack of leadership during that attack which led to the death of two of the four victims. It explains that the Obama Administration was already working on a cover-up during the attack - when Ambassador Stevens was missing and not yet reported dead and at least two of the four victims were still on the roof of the compound (Glen Doherty and Tyrone Woods) and fighting for their lives.

The official 800 page committee report issued Tuesday came just a few hours after a politically-motivated report released by the Democrats, which referred to Donald Trump more times than two of the Benghazi victims.

While the report does find fault with Clinton and the State Department, it does not focus on her, just as committee Chairman Trey Gowdy (R-SC) promised. The report is a chronology of the events leading up to the attack, the attack itself and the aftermath. Additionally, the committee interviewed more than 80 people and reviewed thousands of pages of new documents not available to any prior investigation.

Along with finding fault with State Department staff and Hillary Clinton's actions, the report criticizes the CIA, saying it "missed the looming threat despite warnings and wrote faulty intelligence reports after the attack. The findings will also indicate that the Defense Department did not meet its response times to deploy military assets to Benghazi and follow up to ensure Americans were rescued in a timely fashion."

It is not surprising that the report says the story the Administration told America, that terrorist attack in Benghazi was incited by a Mohammed video on YouTube, was a fabrication invented by the Obama Administration political team and had nothing to do with the ongoing live reports the state department was getting from Benghazi during the attack.

One U.S. agent at the American outpost in Benghazi, whose name was withheld for security reasons, said that, just before the attack, they heard “some kind of chanting.”

Then that sound was immediately followed by “explosions” and “gunfire, then roughly 70 people rushing into the compound with an assortment of “AK-47s, grenades, RPG’s … a couple of different assault rifles,” the agent said.

In addition, a senior watch officer at the State Department's diplomatic security command described the Sept. 11, 2012, strikes as "a full on attack against our compound.”

When asked whether he saw or heard a protest prior to the attacks, the officer replied, "zip, nothing, nada."

"The firsthand accounts made their way to the office of the Secretary through multiple channels quickly …,” the report concluded."

Not one of the reports provided from the people on the ground during the attack mentioned a protest or a video, yet as the attack was happening, senior members of the administration were meeting to create that story, even as they knew that Ambassador Stevens was missing (but, before anyone knew he had died) and CIA operatives Glen Doherty and Tyrone Woods were standing on the roof of the Benghazi Compound fighting for their lives.

That White House meeting that was convened roughly three hours into the attack, and included deputies to senior Cabinet members and Clinton, focused on a "Terrorist Event Notification" - not the video:

Five of the 10 action items from the 7:30 PM White House meeting referenced the video, but no direct link or solid evidence existed connecting the attacks in Benghazi and the video at the time the meeting took place. The State Department senior officials at the meeting had access to eyewitness accounts to the attack in real time. The Diplomatic Security Command Center was in direct contact with the Diplomatic Security Agents on the ground in Benghazi and sent out multiple updates about the situation, including a “Terrorism Event Notification.” The State Department Watch Center had also notified Jake Sullivan and Cheryl Mills that it had set up a direct telephone line to Tripoli. There was no mention of the video from the agents on the ground. Greg Hicks—one of the last people to talk to Chris Stevens before he died—said there was virtually no discussion about the video in Libya leading up to the attacks.

The only statement from the Obama administration that evening came from Hillary Clinton and included this line: “Some have sought to justify this vicious behavior as a response to inflammatory material posted on the Internet.”

But, as we learned during her testimony to the committee, Ms. Clinton was saying something else in private:

In an email provided to the Select Committee, Clinton told daughter Chelsea, “Two of our officers were killed in Benghazi by an Al Queda-like [sic] group.”

Clinton also told Egypt’s prime minister the following day: “We know that the attacks in Libya had nothing to do with the film. It was a planned attack -- not a protest.”

The report says that, despite "Obama and Secretary of Defense Leon Panetta’s clear orders to deploy military assets, nothing was en route to Libya at the time the last two Americans were killed almost 8 hours after the attacks began."

The reason for the delay was a concern about the rescuers' wardrobe:

It was the State Department which originally suggested the wardrobe change.  According to the notes from the 7:30PM White House meeting:

Apparently Pat K[ennedy] expressed concern on the [White House meeting] about Libyan reaction if uniformed US forces arrived in country in military aircraft; there was discussion of the option of entering in plainclothes, which JCS explained was possible but noted that the risks to the forces to remaining in plainclothes increased as they transited from point of entry to the relevant location of action.

A email framed the issue as follows:

The U.S. military has begun notifying special units of likely deployment, with ultimate disposition pending State coordination with the Libyan government and final approval by the White House. State remains concerned that any U.S. military intervention be fully coordinated with the Libyan Government and convey Libyan concerns that [sic] about U.S. military presence, to include concerns that wheeled military vehicles should not be used and U.S. Military Forces should consider deploying in civilian attire.

Thus, Panetta was being honest when he said there was no stand-down order. The rescue was delayed because of a concern about the appropriate wardrobe initiated by the State Department.

According to Susan Rice, who went on five Sunday news programs days after the attack blaming the video, her statements blaming the video "were based on the best available information, but nobody from the intelligence community such as the CIA director or the Director of National Intelligence briefed Rice. That was done by the political appointees."

So, it seems that, even though she was playing the role of the administration's spokesperson on the Sunday shows, it was deemed that Rice should get her story from the spin-masters.

The email was sent to a dozen members of the administration's inner circle, including key members of the White House communications team such as then-Press Secretary Jay Carney, who also pushed the video narrative in the days after the attacks.

In the email, Rhodes specifically draws attention to the anti-Islam Internet video, without distinguishing whether the Benghazi attack was different from protests elsewhere, including one day earlier in Cairo.

The Rhodes email, which was a catalyst for the Select Committee, was first obtained by Judicial Watch and reported here. Per the report, Rhodes was also the official who signed off on Clinton’s statement the night of the attack linking the video to Benghazi.

Among the goals laid out for Rice in the email were "to underscore that these protests are rooted in an Internet video and not a broader failure of policy” and “to reinforce the President and Administration's strength and steadiness in dealing with difficult challenges." Both this subterfuge and the attack occurred less than two months before the 2012 presidential election.

According to the committee, the CIA post-attack intelligence analysis contradicted the eyewitness accounts that night, and the "administration latched onto the faulty analysis to defend and justify their misleading statements to the public."

The CIA’s September 13, 2012, intelligence assessment was rife with errors. On the first page, there is a single mention of “the early stages of the protest” buried in one of the bullet points. The article cited to support the mention of a protest in this instance was actually from September 4. In other words, the analysts used an article from a full week before the attacks to support the premise that a protest had occurred just prior to the attack on September 11

A headline on the following page of the CIA’s September 13 intelligence assessment stated “Extremists Capitalized on Benghazi Protests,” but nothing in the actual text box supports that title. As it turns out, the title of the text box was supposed to be “Extremists Capitalized on Cairo Protests.” That small but vital difference—from Cairo to Benghazi—had major implications in how people in the administration were able to message the attacks

On top of the full committee report, two of the panel’s Republican members, Reps. Mike Pompeo (R-KS) and Jim Jordan (R-OH) released their own views, stating that the committee should have been harsher on Ms. Clinton, saying that the committee needed an answer for why she was so insistent on keeping people in Libya’s troubled second city — creating a target for the terrorists.

“There was a very good chance that everyone was going to die,” one diplomatic security agent told the committee, recalling the troublesome security situation in the run-up to the attack.

(...) Mrs. Clinton personally joined a high-level video meeting the night of the attack and that gathering spent an extraordinary amount of time focused on the video, the lawmakers said. Of 11 action items emerging from that meeting, five of them related to the video, according to an email recounting the meeting, which the committee unearthed.

“What has also emerged is a picture of the State Department eating up valuable time by insisting that certain elements of the U.S. military respond to Libya in civilian clothes and that it not use vehicles with United States markings,” the lawmakers said. “We will never know exactly how long these conditions delayed the military response but that they were even a part of the discussion is troubling.”

This may not be the final version of the report, since the committee has scheduled a meeting markup to discuss and vote on the proposed report on July 8, 2016. According to the report issued Tuesday, all members of the committee will have the opportunity to offer changes in a manner consistent with the rules of the House at that time.