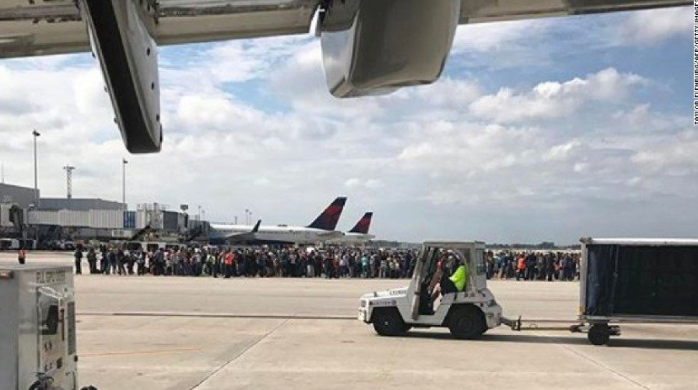 He flew to Florida from Alaska on Friday and retrieved the weapon from his luggage at baggage claim in Terminal 2.

The suspect had declared his weapon, as certain airlines allow people to legally check their personal firearms.

MRCTV will provide more details as they come.

UPDATE 3:40 P.M. EST: Broward County Sheriff Scott Israel said in a press conference that there has been no other shooting confirmed despite reports of shots fired in a parking garage at Ft. Lauderdale-Hollywood Airport.

"The only gun shots ... have been downstairs in Terminal 2," he said, referring to the shooting on Friday at around 12:55 P.M EST.

The shooting took place in the lower level of Terminal 2 near baggage claim, killing five people and injuring 13.

Of those injured, Israel said that the Broward County Sheriff's Department does not know the degree of their injuries.

He added that they will not be "releasing any information on any of the victims until we identify them and we are able to notify next of kin first."

The shooter is unharmed and in custody. No law enforcement fired any shots.

SWAT teams are currently clearing and securing the entire airport "to make sure it's safe." Sheriff Israel described the situation as "fluid and active." 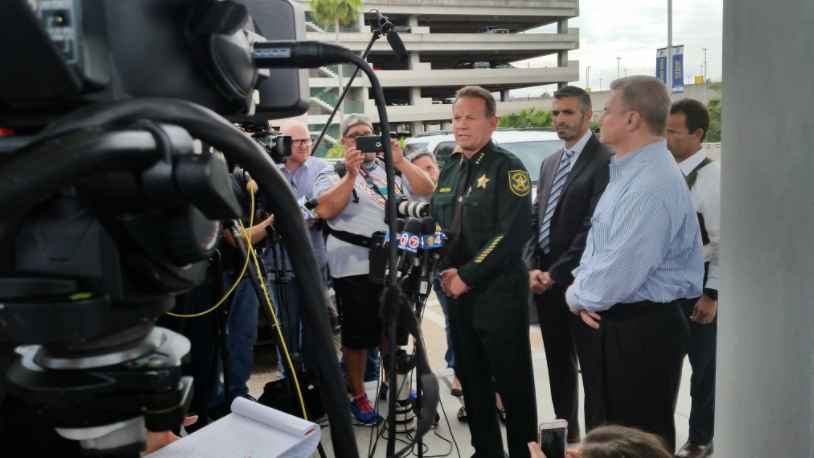 The Director of the Ft. Lauderdale-Hollywood International Airport, Mark Gale, said that he's not sure when the airport will reopen, as the investigation may take hours.

The FBI is working with local authorities to interview the shooter and will wait until the investigation is complete to make a final determination on the nature of the incident.

The FBI did not provide any details as to the weapon or the motive of the shooter.

.@ScottJIsrael: "At this point, it looks like he acted alone... At this point, there is no second active shooter." #FortLauderdale pic.twitter.com/OAQaCSVrvq

UPDATE 3:15 P.M. EST: Broward County Mayor Barbara Sharief has confirmed to CBS News that five people were killed, 13 injured from the shooting at a baggage claim in Ft. Lauderdale-Hollywood International Airport on Friday.

The mayor added that the commotion outside the terminals is related to sounds heard from an airport parking garage.

She said there is "nothing confirmed, no other shootings, no other active threats," despite an announcement by the TSA of a second active shooter situation.

.@BrowardCounty mayor says other commotion outside airport is related to a sound heard at a nearby parking garage. "No other active threats" pic.twitter.com/NUzMFdgFv3

UPDATE 2:55 P.M. EST: Five people were killed and eight injured in a shooting at Ft. Lauderdale-Hollywood International Airport on Friday, and authorities are searching for a possible second shooter.

Airport passengers have been alerted to shelter in place.

Police are actively securing the area and evacuating people from the airport.

UPDATE 2:45 P.M. EST: The baggage claim shooter has been identified as Esteban Santiago, according to Florida Sen. Bill Nelson (D).

Nelson told CNN in an interview that he got the information from the head of the TSA.

Santiago reportedly had a military ID and a handgun on him when taken into custody by local authorities.

UPDATE 2:35 P.M. EST: There are reports of shots fired in a parking garage at Ft. Lauderdale-Hollywood International Airport.

There appears to be a lot commotion on the tarmack, people sprinting out of the airport, ducking and hiding behind trucks and baggage carts.

A witness at the airport told Fox News in a phone interview that people have been ordered to lay on the ground and stay still.

Witness: "Everybody is down. I'm not supposed to move." #FortLauderdale pic.twitter.com/onBsWDgHCx

CNN tweeted footage of the scene.

Police were seen screening the parking garage, level to level.

The airport is on lock-down.

The department's communications received a call at around 12:55 P.M. EST about shots fired at 100 Terminal Drive.

Those injured have been transported to a local hospital.

Update: 5 ppl dead; 8 injured were taken to an area hospital.

UPDATE 1:45 P.M. EST: Multiple people have been confirmed dead and one person is in custody.

The Broward County Sheriff tweeted the following at 1:43 p.m. EST:

Ft. Lauderdale-Hollywood International Airport is under the jurisdiction of the Broward County Sheriff’s office.

The airport has been shut down as the investigation continues.

Original story: At least nine people have been injured in a shooting at Ft. Lauderdale-Hollywood International Airport on Friday.

The shooter is now in custody. His motive is unknown.

Authorities are working to rule the incident as either a violent act by a lone wolf or an act of terror.

Local, state, and federal law enforcement are all on the scene.

The shooting took place at baggage claim. The suspect in custody is believed to be the only shooter.

"At this time the airport is shut down" says Broward County Mayor after Ft. Lauderdale airport shooting https://t.co/RIMPlVEVQv