Someone is finally putting fake black guy writer Shaun King’s feet to the fire after having had enough of King’s constant effort to divide the races.

Fox Sports Radio host Clay Travis called King out on Twitter, challenging him to take a DNA test to prove that he’s “more than 25% black.”

Travis also provided a little incentive for King in the tweet:

Travis’ offer came after King published an article for the New York Daily News on Tuesday titled, “I’m Boycotting the NFL [National Football League] Because of Its Blatant Bigotry and Anti-Blackness.”

Further investigation by MRCTV (which wasn’t that difficult to do) shows that King’s claim that the NFL is “anti-black” is seriously lacking evidence.

The Institute for Diversity and Ethics in Sport (TIDES) released a report in 2015 that gave the NFL an “A” grade for “racial hiring practices” for the sixth consecutive year.

Just by looking at all of the head coaches in the NFL, MRCTV observed that 18.8 percent of NFL coaches are black. This is 5.3 percent better than the percentage of the overall black population in the U.S.

Let’s take it one step further, shall we?

According to the TIDES racial report card study:

It should be fair to surmise that if 68.7 percent of NFL players are black, black people represent over two-thirds of NFL players, while still making up less than one-sixth of the American population.

How does that make the NFL racist, again?

King says that he is boycotting the NFL because his “friend and brother” Colin Kaepernick has been “blacklisted” from the NFL after kneeling for the National Anthem during games as a way to acknowledge racial inequality.

If the NFL is so racist then why would white people, who comprise 83 percent of the NFL's fan base, follow a league that whose players are 68.7 percent black?

Travis faced some backlash on Twitter, but fired back with logic of his own: 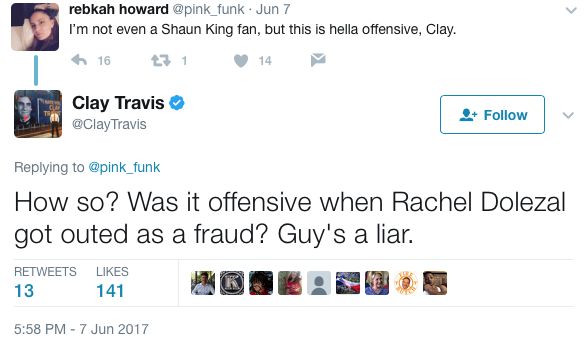 All in all, Shaun King is a racist white guy who hates white guys. Go figure.

The Institute for Diversity and Ethics in Sport