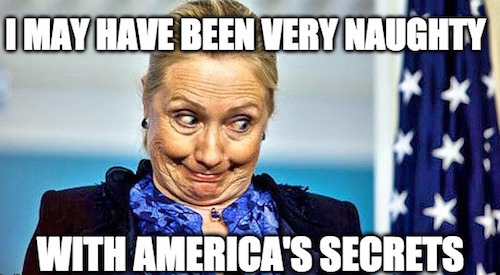 Fox News' Catherine Herridge is reporting that at least one of the emails found on Hillary Clinton's private server contained the code "HCS-O," which is the designation for  the most sensitive category of intelligence derived from information collected and provided by human sources. HCS-O intelligence may identify a human source for the information. Thus, if Ms. Clinton's server was hacked, secret sources, informants, or even U.S. spies may have been compromised.

Herridge confirmed her information with two intelligence sources who were not authorized to speak on the record.

Both sources are familiar with the intelligence community inspector general’s January 14 letter to Congress, advising the Oversight committees that intelligence beyond Top Secret -- known as Special Access Program (SAP) -- was identified in the Clinton emails, as well the supporting documents from the affected agencies that owned the information and have final say on classification.

According to a December 2013 policy document released by the Office of the Director of National Intelligence: “The HSC-0 compartment (Operations) is used to protect exceptionally fragile and unique IC (intelligence community) clandestine HUMINT operations and methods that are not intended for dissemination outside of the originating agency.”

It is not publicly known whether the information contained in the Clinton emails also revealed who the human source was, their nationality or affiliation.

It is also not known whether or not Ms.Clinton's server was hacked by hostile countries - but, according to former secretary of defense Robert Gates, "odds are pretty high" that they were.

Gates was interviewed by radio host Hugh Hewitt on Thursday evening and the two discussed the Clinton emails:

Hewitt: One of your colleagues, Mike Morell, said on this program, or actually agreed with my assertion that almost certainly, Russians, Chinese and Iranians had compromised the home brew server of the former Secretary of State. He agreed with that. Do you agree with his assessment of my assessment?

Gates: Well, given the fact that the Pentagon acknowledges that they get attacked about 100,000 times a day, I think the odds are pretty high.

The HSC-O classification falls into the Special Access Programs (SAP) category which is for information more sensitive than those with the top secret designation. Generally, any information with a SAP designation is shared on a "need to know" basis (like my wife with the family checkbook). It is safe to assume that, if someone hacked into Hillary Clinton's emails, they were not on the "need to know" list.

"There are people’s lives at stake. Certainly in an intel SAP, if you’re talking about sources and methods, there may be one person in the world that would have access to the type of information contained in that SAP,” he said.

If there is any damage from the HSC-O email being hacked, it has already been done.  The key take-away from this story is that one of the people running to be the next president of the United States took such a cavalier attitude toward sensitive information that she may have put our most classified secrets - and the people who helped us get them - in mortal danger.

Below is a video of the Catherine Herridge report: