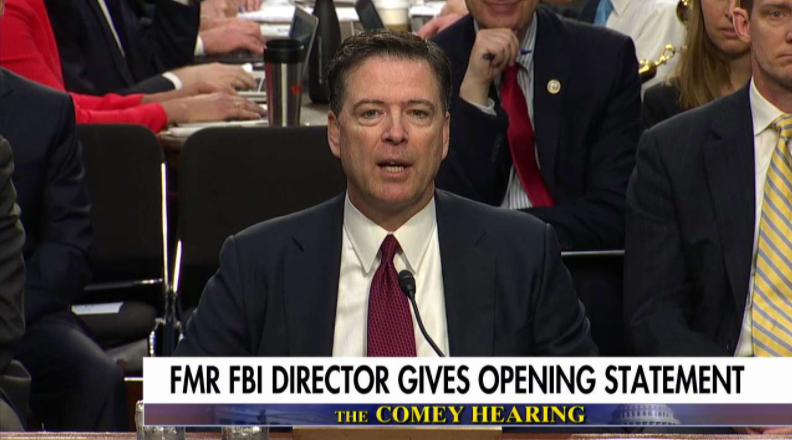 Former FBI Director James Comey testified before the Senate Intelligence Committee on Thursday regarding his interactions with President Trump leading up to his dismissal.

Comey explained that he was “confused and increasingly concerned” about the “shifting explanations” for his firing since Trump had repeatedly told him before and after the election that he was “doing a great job.”

“Even though I was appointed to a 10 year term, which Congress created in order to underscore the importance of the FBI being outside politics and independent, I understood that I could be fired by a president for any reason or for no reason at all,” said Comey. “But then the shifting explanations confused me and increasingly concerned me. They confused me because the President that I had multiple conversations about my job… and he had repeatedly told me I was doing a great job and I repeatedly assured him that I did intend to stay and serve out the remaining six years of my term.”

“So it confused me when I saw on television the President saying that he actually fired me because of the Russia investigation. And learned again from the media that he was telling privately, other parties, that my firing had relieved great pressure on the Russia investigation. I was also confused by the initial explanation that was offered publicly that I was fired because of the decisions I had made in the election year,” he went on.”

“That didn’t make sense to me for a whole bunch of reasons, including the time and all the water that had gone under the bridge since those hard decisions that had to be made.”

Comey went on to say that while Trump as President of the United States had the discretion to fire him, his administration went a step to far and “chose to defame” him and the FBI.

“The FBI will be fine without me,” he continued. “The FBI is honest, the FBI is strong, and the FBI is and always will be independent.”

He said as he closed his opening remarks, “And now to my former colleagues if I may, I am so sorry I did not get the chance to say goodbye to you properly. It was the honor of my life to serve beside you.”

In an unprecedented move, Comey released a transcript of his prepared remarks a day ahead of his testimony. He claimed in the statement that Trump did not request he shut down the FBI’s investigation of Russia’s interference in the election and verified Trump’s claim that Comey assured him on three different occasions that the President was not personally under investigation.

He did say his one-on-one interactions with Trump concerned him “greatly” because he felt as though the President wanted “some sort of patronage relationship,” having asked for Comey’s “loyalty” as head of the Bureau under his administration.

Watch the hearing live below.