Why do people like former U.S. Attorney General Eric Holder still think their opinion matters? He’s more than entitled to his opinion, but Holder espouses his thoughts for agenda-driven political gains. Mr. Holder, it’s time to enjoy the “former” in your title.

On Sunday, President Trump tweeted out a demand “that the Department of Justice look into whether or not the FBI/DOJ infiltrated or surveilled the Trump Campaign for Political Purposes.” 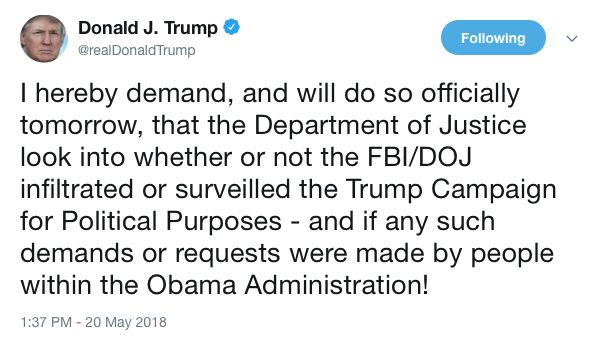 On a side note, White House Press Secretary Sarah Huckabee Sanders sent out a statement indicating that Deputy Attorney General Rod Rosenstein and "others" have agreed "in part" to the investigation, according to ABC News.

"Based on the meeting with the President, the Department of Justice has asked the Inspector General to expand its current investigation to include any irregularities with the Federal Bureau of Investigation’s or the Department of Justice’s tactics concerning the Trump Campaign," the statement said. "It was also agreed that White House Chief of Staff Kelly will immediately set up a meeting with the FBI, DOJ, and DNI together with Congressional Leaders to review highly classified and other information they have requested."

The Left’s constant demand to open and eventually further an investigation into whether there was Russian collusion in the 2016 election was met with resounding cheers from the Far-Left. But, when a sitting president — who happens to be Republican — wants an investigation opened, the sky might as well be falling to the Left.

In response — and without anyone asking for it — Holder tweeted his thoughts about Trump’s “demand.” 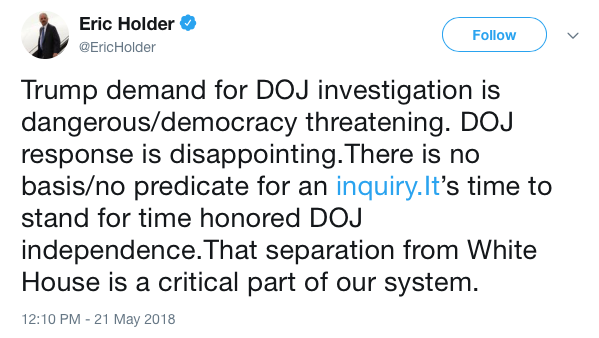 Holder has some nerve talking about how “dangerous” an investigation could be to the U.S. Fast and Furious anyone?

Holder himself benefited from a breach of “time-honored DOJ independence” while Barack Obama was in the Oval Office. President Obama asserted executive privilege to shield an investigation into then-Attorney General Holder and “Fast & Furious,” a DOJ operation which supplied firearms to Mexican cartels — one of which was used to murder Bord[er] Patrol agent Brian Terry. The president’s claim of executive privilege, after lawmakers voted to hold Holder in both civil and criminal contempt of Congress, extended as far as emails between Holder and his wife and mother.

It’s no wonder Holder doesn’t like the idea of an investigation into the actions of the Obama administration. He doesn’t have his buddy in the White House any longer to help save his behind.