According to the most recent data from the USDA, food stamp participation fell by a whopping 587,792 people between December 2017 and January 2018.

Of course, there are still about 40.7 million people on food assistance at a cost of about $5 billion a month, but still.

USDA’s monthly SNAP tracker shows food stamp participation spiked by about three million people last October, as millions of Americans signed up for benefits following a series of devastating hurricanes across parts of Texas and Florida.

The next month, though, food stamp participation fell by an even greater 4 million – and as of the most recent data we’ve got, it’s been dropping ever since.

Between November and December, a net 330,000 fewer people fell off the food stamp roles. Between December and January, the total fell by another 600,000.

Aside from the massive spike (and near-immediate drop) around October, the number of Americans participating in the food stamp program has been dropping at a fairly steady rate since the inauguration of Donald Trump.

Of course, there’s still a long way to go to get down to pre-Obama participation numbers, assuming that’s even possible. In 2008, roughly 28 million people were receiving SNAP benefits. That total increased dramatically during the Obama years, spiking at around 47.6 million in 2013 before falling to about 44 million in 2016. 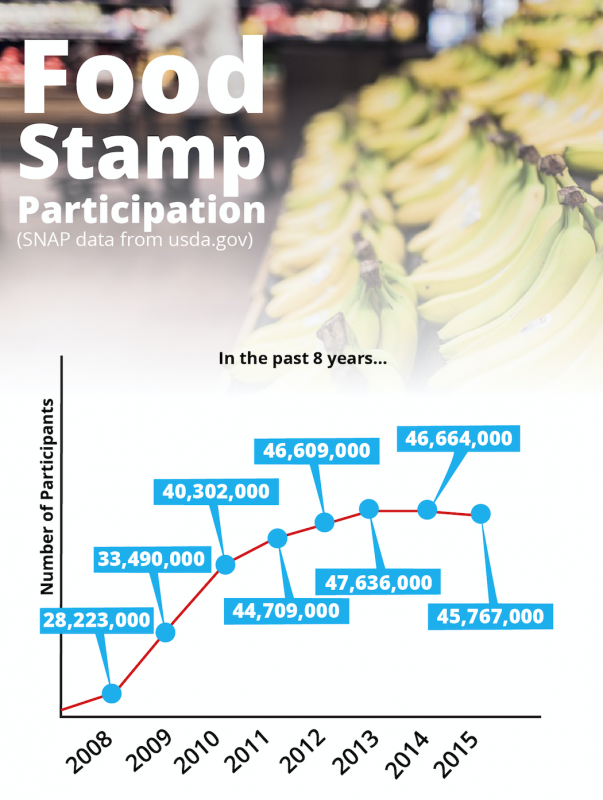 In fact, January’s total of about 40.7 million on food stamps is the lowest number since 2010, when the annual average was 40.3 million participants.