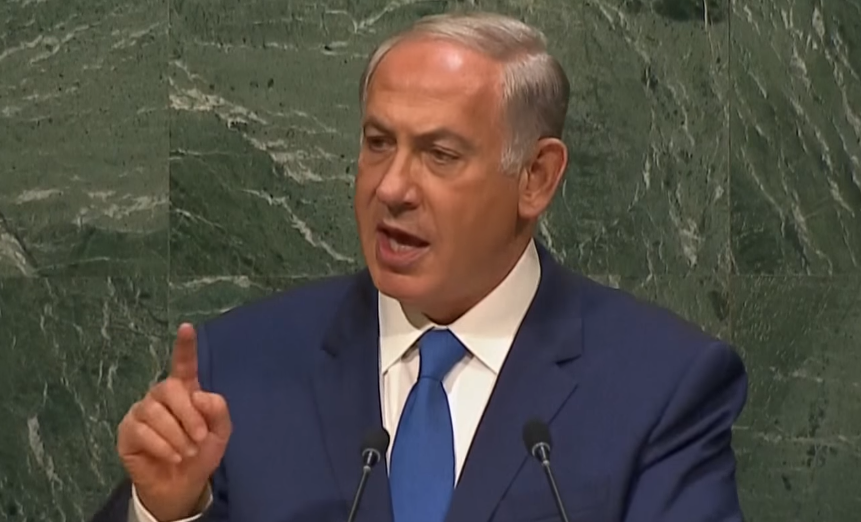 Obama said the following on Tuesday:

If you are a supporter of Israel being its own independent state, the first half of the statement must have been a breath of fresh air - but, in the end, it turned out to be a backhanded compliment given how Obama ended his remark.

In response, Netanyahu addressed the conflict with the Palestinians by slamming the U.N. itself:

Now I know that hearing that from me must surely come as a surprise, because year after year I’ve stood at this very podium and slammed the UN for its obsessive bias against Israel. And the UN deserved every scathing word – for the disgrace of the General Assembly that last year passed 20 resolutions against the democratic state of Israel and a grand total of three resolutions against all the other countries on the planet.

Netanyahu's remarks did not end there. Based on the content of his speech, Netanyahu has apparently had enough of trying to defend the legitimacy of the Jewish state of Israel to people who don’t reprimand countries that are clearly state sponsors of terror, at the very least.

The prime minister invoked the equality Israel has constantly displayed by its acceptance of women into prominent positions, while other countries that call for the demise of Israel widely deny rights to the female population in their nations.

And what about the joke called the UN Human Rights Council, which each year condemns Israel more than all the countries of the world combined? As women are being systematically raped, murdered, sold into slavery across the world, which is the only country that the UN’s Commission on Women chose to condemn this year? Yep, you guessed it – Israel. Israel. Israel, where women fly fighter jets, lead major corporations, head universities, preside – twice – over the Supreme Court, and have served as speaker of the Knesset and prime minister.

During his 40-minute address, Netanyahu also invited Palestinian Authority President Mahmoud Abbas to "speak to people at the Knesset [Israeli parliament] in Jerusalem."

All in all, Netanyahu took the U.N. to task over its constant hypocrisy of saying it wants a peaceful globalized community, all the while accepting countries that allow atrocities to reign supreme over their lands.

For Netanyahu, he believes that countries that accept complete freedom within the law and individualism do not mix with the ideologies of those that widely and publicly accept the United Nation’s belief in a global government.

For the full video of Netanyahu’s speech at the U.N. on Thursday, watch below: