Fired FBI Dir. Comey Admits He Leaked His Own Memos 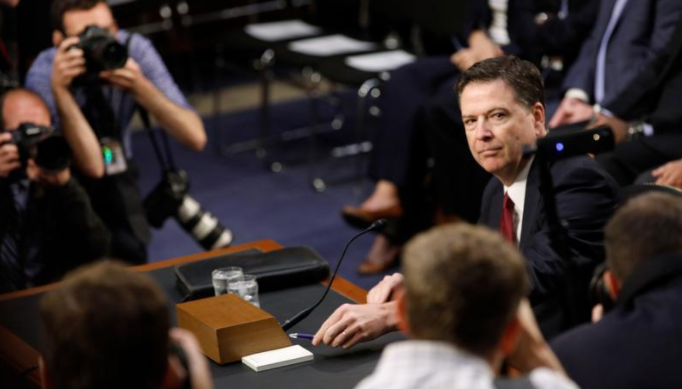 Fired FBI Director James Comey at the Senate Intelligence Committee hearing on Thursday admitted to leaking his own memos to the press.

Comey said that after he was dismissed by President Trump, he gave a copy of a memo to a “friend” to then share it with a reporter. The memo had to do with Comey’s one-on-one conversation with Trump in the Oval Office regarding the President’s former national security adviser Michael Flynn.

"My judgment was, I needed to get that out into the public square, and so I asked a friend of mine to share the content of the memo with a reporter," Comey said. "Didn't do it myself for a variety of reasons, but I asked him to, because I thought, that might prompt the appointment of the special counsel."

Comey later defended his decision to share that information "as a private citizen":

“I understood this to be my recollection recorded of my conversation with the President,” he said. “As a private citizen, I felt free to share that. I thought it very important to get it out.”

He noted that he did not share any memos involving classified information.

Comey said that the reason he did not personally give a journalist the memo instead of going through a third party was because he worried it would start a media frenzy.

“Because I was worried that the media was actually camping out at the end of my driveway at that point, and I was actually going out of town with my wife to hide. I worried it might be like feeding seagulls at the beach if it was I who gave it to the media, so I asked my friend, make sure this gets out,” he said.

On whether Comey believed the conversation with Trump constituted obstruction of justice, he said that it was not for him to decide.

The former FBI director said that Trump never ordered him to "let go," or shut down, the FBI's investigation of Flynn, despite media reports suggesting otherwise.

"While Comey did allege Trump told him he 'wished' the FBI would drop the investigation into Michael Flynn’s Russia connections, he admitted the president never actually asked, ordered or otherwise directed him to do so – though he claimed he 'took it as, this is what he wants me to do,'" reports MRCTV.