Carly Fiorina Shuts Down CNN Host: 'In This Country,' We 'Protect Free Speech' 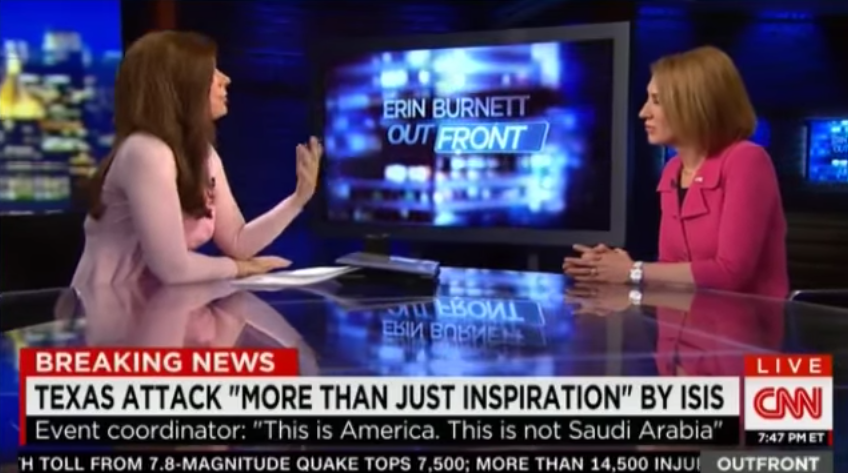 Two gunmen, one confirmed to have declared his loyalty to ISIS, opened fire on a free speech event in Garland, Texas on Sunday night.

The liberal media were quick to the blame the organizers of the event—specifically Pamela Geller, the president of the American Freedom Defense Initiative—for provoking the attack with a cartoon contest featuring the Muslim prophet Mohammed.

CNN’s Erin Burnett pressed one of the newest additions to the 2016 GOP primary, Carly Fiorina, to condemn Geller for supposedly knowingly and even purposefully inciting violence by jihadists.

“But you would agree with that? With white supremacists?” Burnett interjected.

“And yet,” Fiorina continued, dismissing the interruption, “we do protect free speech.”

“I’m very pleased that the President came out and called this what it is, which is an attempted act of terror,” the potential 2016 GOP presidential nominee said, “because in other attacks, he hasn’t always been willing to call it what it is.”

“He said that the attack on a Jewish grocery store was a random act. It clearly wasn’t. The beheading of Christians, or people who are the wrong sect of Islam, is clearly not random. And neither was this terrorist attack.”

“So we can say this was a provocative gathering. I think that’s true. I think it’s fair,” Fiorina said.

“But it never justifies this kind of terror attack and we should call it what it is.”

Burnett then tried to push Fiorina into saying that Pamela Geller should not have held the cartoon contest knowing that it would offend Muslims.

“A lot of people do things in this country that I don’t agree with—that I don’t approve of,” Fiorina replied.

“But nevertheless, in this country, they’re free to do it,” she said.