I don’t think I’ll ever understand modern feminists’ lack of logic and reasoning in most things they do, and I’m not sure I ever will. I feel the same way about “modern art.” What is “modern” portraying a degrading scene in order to prove some kind of feminist “intellectual” point? I guess as long as the “model” get paid, what is it to them?

Activist art group CulturalDC, a non-profit organization that has received tens of thousands of dollars in federal grant money in the past, has a new exhibit currently being displayed at the Flashpoint Gallery in Washington D.C. The display features an Ivanka Trump “look-a-like,” who totally doesn’t look like President Trump’s daughter, in a dress wielding a vacuum.

There’s a reason for the vacuum, and I can’t make this up.

Inspired by a figure whose public persona incorporates an almost comically wide range of feminine identities – daughter, wife, mother, sister, model, working woman, blonde – Ivanka Vacuuming is simultaneously a visual celebration of a contemporary feminine icon; a portrait of our own relationship to that figure; and a questioning of our complicity in her role-playing[…]

Entering the gallery space, viewers will notice a woman bearing a striking resemblance to that Ivanka [Trump], cleaning a plush pink carpet. In front of this scene is a white pedestal with a giant pile of crumbs on top. The public is invited to throw crumbs onto the carpet, watching as Ivanka elegantly vacuums up the mess, her smile never wavering. This process repeats itself for the entire duration of the performance.

This is apparently “modern art.”

I thought modern feminists were all about female empowerment? What’s empowering about throwing crumbs on a carpet so that a woman can vacuum it up?

First of all, people aren't throwing crumbs at her. She's vacuuming them up from the carpet. You're participating in this act of subjugation, that's true, but the piece is not 'Ivanka vacuuming,' it's a combination of that and the participating viewer. ... It puts the viewer in a very complicated position. And I'm most interested in the complications of the viewer; how they decide to engage with this feminine figure. What does it mean to either throw crumbs, or stand there watching other people throwing crumbs?

If you’re not a slob, why would you throw crumbs on anyone’s floor? The fact that the subject of the piece is Ivanka Trump shouldn’t matter to a feminist. True female empowerment would dictate that the women would question why people are throwing crumbs on her carpet rather than simply vacuuming it all up.

By the way, Rubell is looked at as a “one of the smartest feminist artists today.” 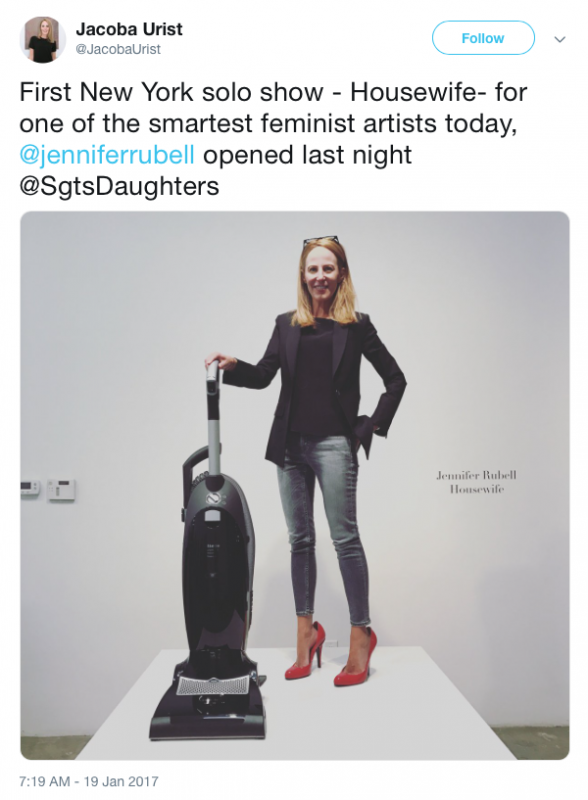 If the “art piece” isn’t a form of female degradation, then why select Ivanka Trump of all people to be the subject of the piece? My guess is that it has something to do with the fact that the Trump name has made anti-Trumpers more money than they would have by not using their family name.

This “art piece” has very little to do with feminism and everything to do with taking a veiled shot at the Trump family because it’s “trendy.”

For a local report of this story, watch below: