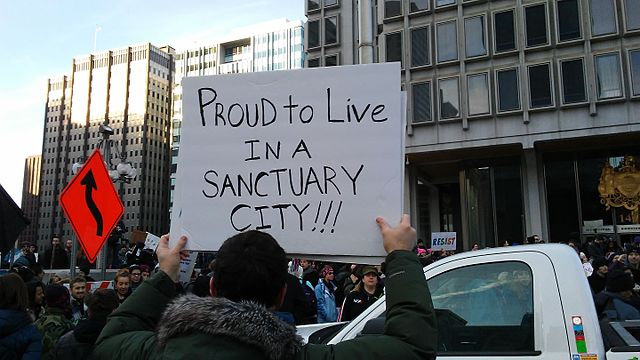 On Friday, September 15, the Associated Press reported on a fascinating new wrinkle in the centuries-old face of unconstitutional federal activity, and the details might surprise many who are concerned about the sticky issue of “immigration”.

According to the report, Federal District Judge Harry Leinenweber just ruled that Attorney General Jeff Sessions and the Justice Department cannot withhold federal “public safety” grants to so-called “Sanctuary Cities” if the politicians in those cities did not conform to federal immigration policies. This, in effect, temporarily removes a powerful tool in the Trump Administration’s work shed as the President attempts to wrangle with “illegal immigration”.

But the ruling does something even more profound. It allows keen observers to note that one tax-paid employee of one federal branch of government stands in opposition of another while they debate the so-called “legality” of two patently, egregiously unconstitutional issues. This district court ruling focuses people not only on “Sanctuary Cities”, but on whether the feds can ban them -- and on not only whether the feds can stop “grants” to those cities, but whether those “grants” are constitutional at all.

Guess what? No surprise, you won’t find either of those issues being discussed by Mr. Sessions or Judge Leinenweber.

And, yeah, guess what else…? As mentioned above, neither federal “public safety” grants nor federal control over immigration are sanctioned by the US Constitution.

First, let's offer intellectual ammo on the least complicated of those two points. Nowhere in the US Constitution is any branch of the federal government granted the power to offer confiscated tax money (or fiat money created out of thin air) to city or state politicians for anything, let alone “public safety”.

For an easy reference on this topic of unconstitutional pork spending, we can turn to none other than US hero David Crockett, who offered an important, and historically essential, speech now entitled “Not Yours to Give” on the floor of Congress in 1830.

Mr. Crockett was standing in opposition to a bill that would give extra money to the widow of a Revolutionary War vet, a vet who had already been paid for his service. Despite the emotion driving the support of the bill, Crockett, a second-term Congressman from Tennessee, told the floor that in his first term, he and others in the House saw a fire in Georgetown. He and many others on Capital hill raced to the scene to combat the fire, but the site was a total loss. Later, he supported an aid bill to help pay for reconstruction for those in Georgetown who had suffered. The bill passed. But when Mr. Crockett was campaigning shortly thereafter, he met a farmer who explained to him that the Constitution did not grant him any such power. By voting for it, the farmer revealed, Crockett showed that he either did not understand what the Constitution said, or he flouted its provisions. Crockett was stunned, and he changed his ways, thus delivering this information to the floor in 1830, and explaining why the new bill to help the widow was unconstitutional. He proceeded to try to block unconstitutional bills for the rest of his time in office.

The Constitution has not been amended to allow this kind of spending, so why is it that a federal district judge didn’t bother to mention that “grants” from the US government aren’t provided for in the document he claims to uphold? Instead, he based his ruling on statute, rather than upholding his oath.

Similarly, neither Mr. Sessions nor Judge Leinenweber appears interested in acknowledging that the US Constitution does not even mention the word “immigration”. This is a point that many often conflate - the Constitution’s provision that Congress can make rules regarding naturalization with the idea that it can make rules regarding immigration. But being granted the power to determine how a foreigner can become a citizen has nothing to do with having a power over whether non-citizens can perambulate on the soil of a US state.

In fact, that is a state issue. Thomas Jefferson, writing his “Virginia Resolution” said so in response to the unconstitutional “Alien and Sedition Acts” of 1798.

When the state of Texas finally adopted its constitution in 1869, it included a bureau of immigration.

The only place in the US Constitution that could be interpreted as saying anything about immigration is Article One, Section Nine, which focuses on slave importation, and grants Congress the power to control the “importation” of people only in the first thirteen states, and only after 1808. This was a provision included to assure southern states that slavery would not be stopped by acts of Congress banning new slaves from being imported into those states. It was also a provision that was key to leading to the Missouri Compromise, whereby future states entering the union would enter in “slave state”-“free state” order.

It wasn’t until 1875, and a corrupt Supreme Court ruling over the 1872 congressional Chinese Exclusion Act that federal control over immigration was created by judicial fiat. It is clearly not a power granted to the feds in the Constitution.

But the feds won’t argue about it, which is why so many folks who would usually seem opposed to greater federal power, and would be in favor of state power, are unaware of this historical and constitutional history.

It seems that Mr. Sessions and Judge Leinenweber are unaware of it as well.