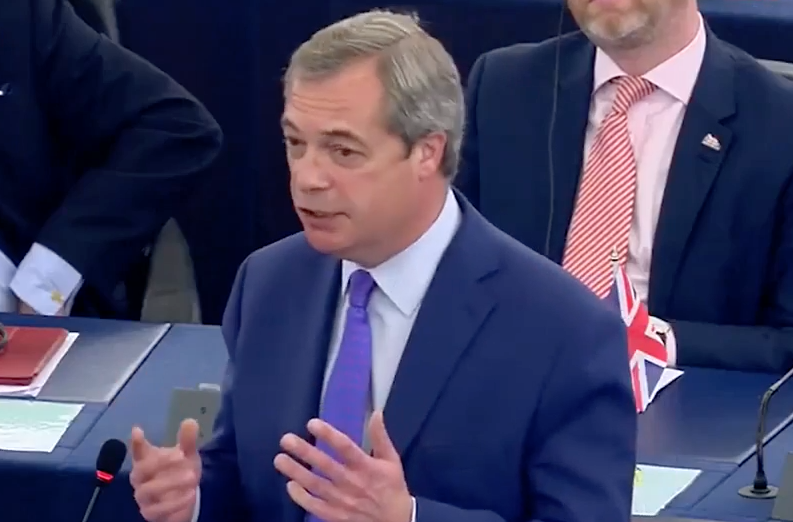 Nigel Farage, the former leader of the U.K.'s Independent Party, could be considered one of those mavericks that has no problem speaking his his mind, and in most cases, Farage speaks with an eloquence and voracity that is seldom seen in today’s global political climate.

Farage spoke at the European Union (EU) Parliament in Strasbourg, France on Wednesday, where he compared the globalist governing body to the “mafia,” saying that their demands for the “Brexit” of the U.K. are “not just unreasonable, but in some cases clearly impossible for Britain to comply with.”

“You have shown yourselves, with these demands, to be vindictive, to be nasty — all I can say is thank goodness we’re leaving,” Farage directed at Members of European Parliament (MEPs). “You’re behaving like the mafia — you think we’re a hostage. We’re not. We’re free to go!”

The mafia comparison did not sit well with EU Parliament President, Antonio Tajani, who called Farage’s remarks “unacceptable." Farage responded by correcting himself and saying that the term “gangsters” would work as well.

Farage began his comments with a bang when replying to a comment recently made by the EU Parliament’s Brexit coordinator, Guy Verhofstadt.

We’ve had a little history lesson from Mr. Verhofstadt. He made one mistake. In 1973, sir, we did not join the European Union. We joined the European economic community. And had the British people known that it was intended to get political and take away our ability to govern ourselves, we never would.

Farage explained to the MEPs how silly their conditions/demands are for Britain’s exit from the EU:

You began by telling us that we have to pay a bill - a cool £52 billion sterling - a figure that has clearly been plucked out of the air, effectively a form of ransom demand. What you could’ve acknowledged is that we’ve [the U.K.] put net over £200 billion sterling into this project. We’re actually shareholders in this building and in the rest of the assets, and really, you should be making us an offer we can’t refuse.

Farage claims the EU has demanded the U.K. not discuss trade deals of any kind with any other country in the world until they’ve left the EU.

“He [Donald Tusk, President of the European Council] tells us in his memorandum,” Farage continued, “that any future trade deal must insure that the United Kingdom is not allowed to have a competitive advantage.”

Tusk's demand is just more of the usual “fair share” speak that socialists who push a globalist agenda, especially in the EU, love to trot out.

For video of Farage’s comments, watch below:

Members of the European Parliament