Facebook Temporarily Locks Out Conservative Professor, and Won't Say Why

When someone like University of Toronto professor Dr. Jordan B. Peterson uses facts and decades worth of research to blow up the politically correct, Socialist-utopia narrative that guys like Facebook CEO Mark Zuckerberg espouse, it looks a bit shady when the social media giant cracks down on his account.

Peterson, a prominent clinical psychologist, went public with the news that Facebook had recently locked him out of his account. And while it's possible the move was made for security reasons, the lack of response as to why he was locked out in the first place is raising some eyebrows.

Peterson tweeted out that Facebook had locked him out of his account — even though Peterson followed all of Facebook’s requirements for verification of a page as large as his. As of this writing, Peterson’s Facebook page has over 178,000 followers.

Peterson has come under fire recently among liberals and feminists for his evisceration of Channel 4 interviewer Cathy Newman in the U.K. Throughout the interview, Newman kept twisting Peterson’s responses to fit the liberal, feminist narrative that people who don’t agree with them are racist, sexist, bigoted homophobes. Peterson took the ridiculous interview in stride and promptly dispatched of Newman through his will to remain calm and rebut Newman’s accusations.

Peterson speculated that perhaps Facebook is simply trying to be vigilant about fraud but noted that prior censorship conducted by the company makes it “impossible not to be instantly suspicious,” when speaking with TheDCNF.

“The actions of the Big Three (Google, YouTube, Facebook) invoke justifiable paranoia,” the professor told TheDCNF. “They do produce crooked, manipulative algorithms, driven by an explicitly political agenda. They continually demonetize arbitrarily and harshly (most recently with Dave Rubin, Ben Shapiro and I). They do shut people down (as YouTube/Google clearly did to me last year), with little explanation, and they constantly gerrymander their curated content.”

If you haven’t seen the “Rubin Report” interview with Peterson, I highly suggest a viewing. 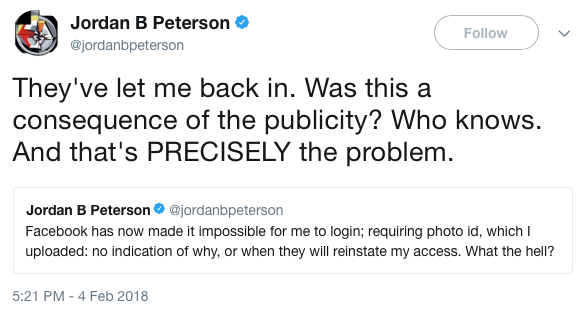 It's true that social media sites including Facebook can lock you out of your profile or take down your account without giving you a good reason. But without a good explanation from the site, in Peterson's case, the whole thing looks dodgy at best.