Facebook censorship of individual member pages is not just limited to the United States.  On Wednesday, Facebook deleted the personal account/page of Ingrid Carlqvist, the Gatestone Institute's Swedish expert. Her offense was posting a video news report she created for Gatestone that discussed an almost 1,500% increase in rapes in Sweden. Ms. Carlqvist suggests the increase of rapes may be attributable to the mass influx of immigrants coming mainly from Muslim countries such as Iraq, Syria and Somalia.

Carlqvist's video (embedded below) is an updated version of a research paper published by Gatestone in February of 2015 which, based on quantitative research, speculated the increase in rapes was attributable to the arrival of large blocks of refugees from Islamist countries.  While Sweden itself doesn't allow the collection of ethic information from criminals, Ingrid Carlqvist uses other related data in an attempt to link the two.  The video is scholarly, not sensationalist in tone.

Sweden's recent population growth is without parallel. Never before in the country's history has the number of inhabitants increased so fast. Sweden is now the fastest growing country in Europe.

Over the past 10-15 years, immigrants have mainly come from Muslim countries such as Iraq, Syria and Somalia. Might this mass influx explain Sweden's rape explosion? It is difficult to give a precise answer, because Swedish law forbids registration based on people's ancestry or religion. One possible explanation is that, on average, people from the Middle East have a vastly different view of women and sex than Scandinavians have. And despite the attempts by the Swedish establishment to convince the population that everyone setting foot on Swedish soil becomes exactly like those who have lived here for dozens of generations, facts point in an altogether different direction.

In this case, Facebook may have been incited to censor this story by a new European Union push in cooperation with Facebook, Twitter, and Google to report incidents of racism or xenophobia to the authorities for criminal prosecution:

In order to prevent the spread of illegal hate speech, it is essential to ensure that relevant national laws transposing the Council Framework Decision on combating racism and xenophobia are fully enforced by Member States in the online as well as the in the offline environment. While the effective application of provisions criminalising hate speech is dependent on a robust system of enforcement of criminal law sanctions against the individual perpetrators of hate speech, this work must be complemented with actions geared at ensuring that illegal hate speech online is expeditiously reviewed by online intermediaries and social media platforms, upon receipt of a valid notification, in an appropriate time-frame. To be considered valid in this respect, a notification should not be insufficiently precise or inadequately substantiated

No matter why Facebook decided to remove Ingrid Carlqvist's personal page, it doesn't lessen the fact that this is another example of their political censorship, and their desire to place political correctness over freedom of the press and freedom of expression.

Beyond that, Ms. Carlqvist's page identifies the fact that she works for the Gatestone Institute. If Facebook had bothered to do the slightest investigation, they would have realized that, even if they didn't like what the Institute was saying, its board is comprised of respected names such as Ambassador Bolton, Alan Dershowitz, Elie Wiesel, Amir Taheri, former CIA Director R. James Woolsey, and others. 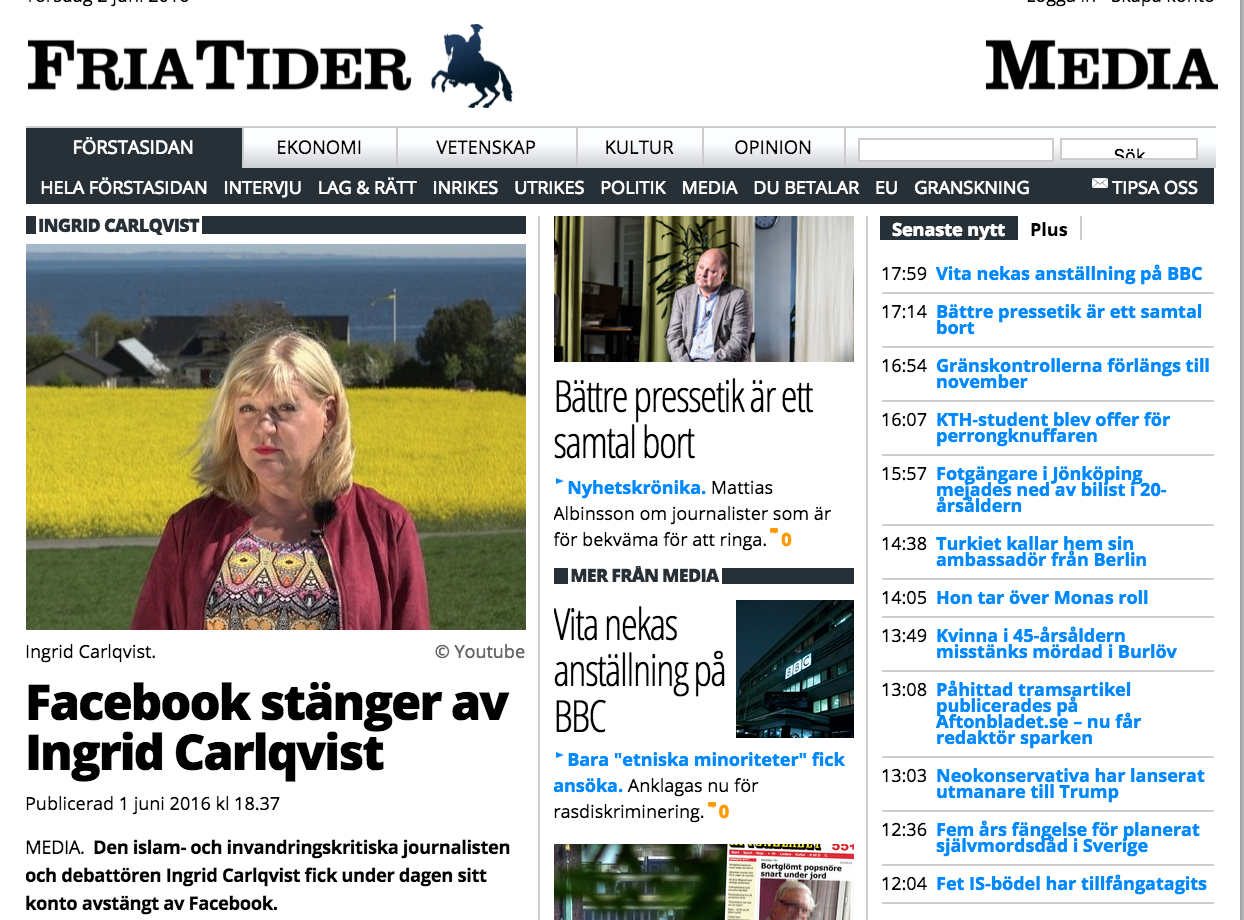 Gatestone made sure the local Swedish media knew about the removal of the page and many of them covered the story, leading Facebook to put Ingrid's account back up. According to Gatestone, the controversy had an ironic result, increasing the viewership of Ingrid Carlqvist's personal page and the video.

Below is the video Facebook removed. Unlike the newspaper above, the video is in English.