EXCLUSIVE Just in Time for Christmas: ‘White Tears’ Candles are Selling Out 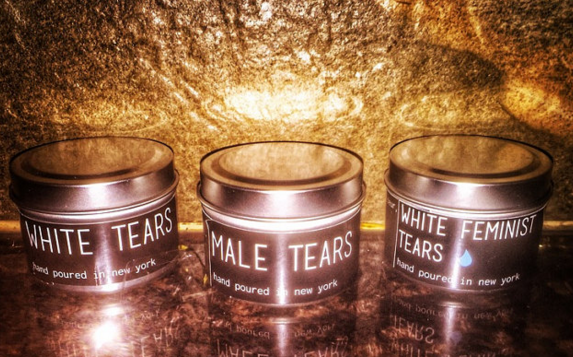 A New York City woman has made thousands of dollars selling “white tears” and “male tears” for Christmas.

According to MRCTV’s rough calculations, Iman has made least $4,000 off her hatred of white people and men.

For the budget-conscious purveyor of white peoples’ liquids made into scented objects, “gift set” options were available.

A gift set of the standard sized 4 oz. candles sold for $35.

A mini gift set with three 2 oz. candles was also available for “just” $26.

Despite the prices, the reviews for Iman’s Etsy store are all positive. One commenter who purchased a “male tears tin candle” wrote, “I loved this on principle even before it arrived, but then it did and it smells AMAZING to boot! THANK YOU.”

According to a conversation on Iman’s Twitter, she also takes request for custom candles. She is allegedly filling an order for “White Christian,” “White Colonial,” and “WASP” tears for a customer:

It is not known whether Iman will fill an order for “black tears,” “female tears,” or general “feminist tears.”