As evidenced by the narrative that’s being pushed among high school students these days, indoctrination isn’t exclusive to college anymore.

A concerned parent, who asked not to be named, contacted MRCTV Friday about an essay that had been given to their high-school aged student at Spanish River High School in Boca Raton, Fla.

The mandatory assignment, handed out by sociology teacher Ryan Wells for a sociology class, instructed students to write a full essay about “gender inequality.”

Here’s a picture of the assignment prompt: 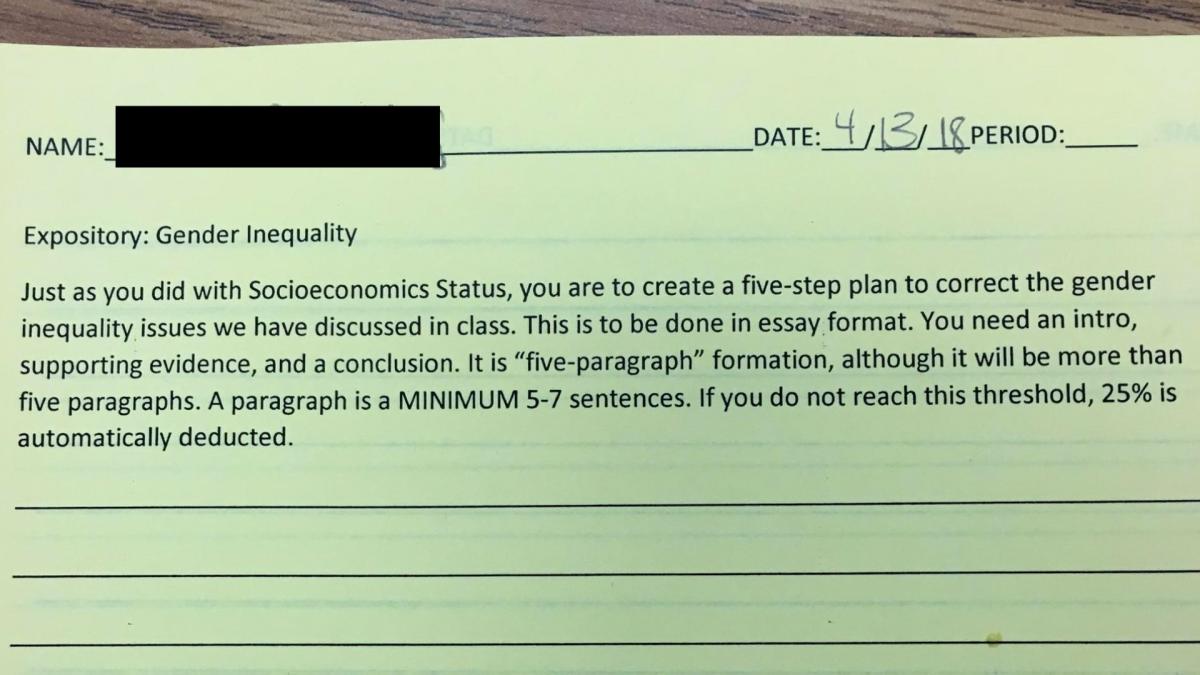 According to the students' notes, those so-called "gender equality issues" include leftist talking points like the debunked gender wage gap, more women in government, and some junk about the LGBT movement.

"The future of gender inequality will depend on the feminist movement and how much collective action is mobilized around the world," the students' class notes read.

The notes also included stuff like, "Changes in the law affecting women, such as compared worth, and changes in the workplace, such as increasing numbers of women in the labor force, will be important," "Changes in the work place have had mixed results - very few women are elected representatives," and "Because of the effective use of collective action by gays and lesbians, homosexuality is more public and widely accepted today (also more protected)."

The student told MRCTV that they weren't comfortable with the assignment because of the implicit bias of the prompt.

"I felt like it was very one-sided," the student told MRCTV, "and in order to voice my opinion it would go against the prompt, therefore resulting in a bad grade. My option was either to not do the assignment or to pretend to believe in something I didn't."

MRCTV attempted to contact Spanish River High School officials, but as of this writing haven’t received a response.

As you all know by now, I’m not the biggest fan of this modern feminist “woke” garbage. I have absolutely no problem with classical feminism, but modern feminism makes me want to puke in my soup. Narrative-based assignments like this - and talking points used by modern feminists - take away from actual disadvantages many women face around the world.

Every event that MRCTV has covered in which modern feminists are squawking about some plight that they made up in their head or parroted from Chelsea Handler, the question is always raised, “What rights does a man have that a woman doesn’t?” We have yet to receive a substantive response.

Because the correct answer is "None."

Although different depending on the situation, men face just as many roadblocks as women do. That's just called life. Everything doesn't go your way all the time.

These “educators” insert their ideology into their syllabus to the point where the lesson plan becomes less about facts and more about an agenda. This type of ideological teaching puts students at a disadvantage, because it puts them in the victim mentality before they even know much about the real world. Instead of producing leaders, schools now produce weak people ill-equipped to handle the stresses of adulthood.

Women aren’t as disadvantaged in the way the media and educational institutions would like adults and children to believe. Schools are doing a serious disservice to students who should be learning more about facts and less about how to hold a protest sign.