In a case of, “What the heck are you smoking?” the European Union took a grasp at the ultimate straw by claiming that the United States came in second in the Rio Olympics medal count.

To whom, you may ask? Well the European Union, of course! 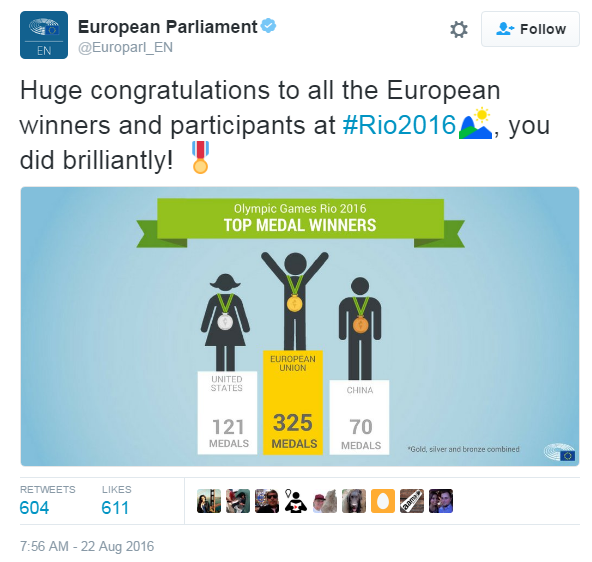 You read that correctly. The European Parliament tweeted out a graphic pointing out that the EU beat out the U.S. in total medals won in Rio by a count of 325-121. Now I know you are probably scratching your head and counting on your fingers to try and figure out how this makes sense, but please allow me to clarify.

The EU is comprised of 27 countries now that Great Britain has left for greener pastures. However, the medal account posted by the European Parliament appears to lump Great Britain in with the EU as one and passes the EU off as some sort of medal winning juggernaut.

If you took the 121 medals the U.S. won and multiplied it by 27, the U.S. would beat the European medal count by a ratio of a little more than 10 to one.

While not surprising, the EU is now publicly touting worldwide that they are propagandists. That is hypocritical because when one of the 27 countries won a gold medal, did the EU flag get raised and the anthem played? Of course not.

Every time someone from the U.S., Mexico or Canada wins a gold medal, there isn’t some North American contingent that claims victory.

The Olympics, for all of their “bringing the world together as one” mentality, is about as individually nationalistic as it gets. Yes, the athletes are trying to win gold for themselves and their teammates in team sports, but they are also representing their individual nation.

This tweet is borderline ridiculous, utterly embarrassing and reeks of teenage desperation. It makes the EU look bad, which isn’t that difficult to do, and it takes away from the accomplishments of individual nations.