When you make your bed, you also have to eventually sleep in it. That’s what happened to ESPN host Jemele Hill after her repeated social media posts against President Trump while also being a complete racist.

Now — months after Hill was suspended for her outspoken views on Trump and the issue of race — Hill has received the news that she will no longer be a host on ESPN’s flagship show, “Sportscenter.” But, Hill will keep her job with the company.

Hill will now work the ESPN website The Undefeated, which is a site dedicated to pushing a divisive racial narrative in sports. “Several ESPN insiders” reportedly told Fox News that the decision to move Hill to The Undefeated website was Hill’s choice. But, Clay Travis of the sports website outkickthecoverage.com tweeted that the move was predicated on declining ratings during Hill’s evening slot on Sportscenter. 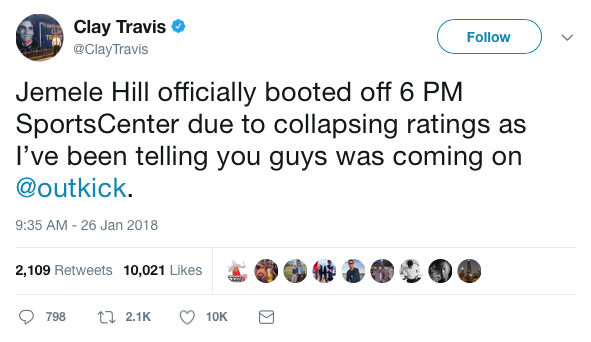 Hill initially got in hot water after tweeting that “Donald Trump is a white supremacist who has largely surrounded himself w/ other white supremacists.” She continued her keyboard diarrhea by invoking the hilarious radical liberal mantra of “white privilege.”

There’s no word on what Hill’s role will be at The Undefeated, but whatever role she takes on should be full narrative-driven falsehoods.