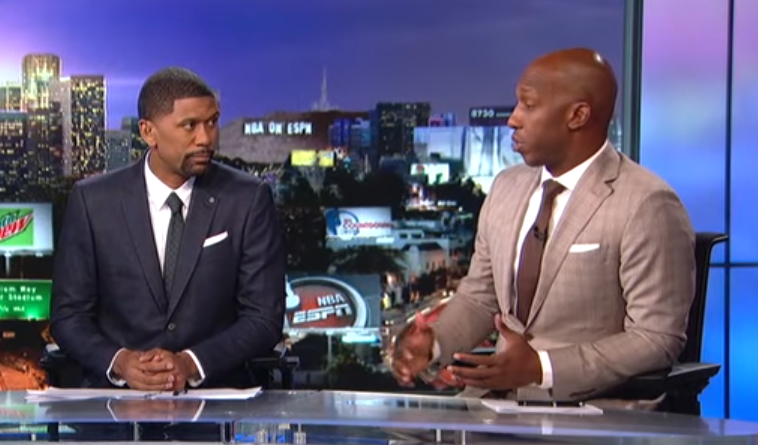 I used to love watching sports highlights on a nightly basis so that I could catch up the action of the day, but ESPN has completely and consistently taken the fun out of sports. They even have sports commentators who have no background in political commentary making politically divisive statements on a regular basis.

As far as I’m concerned, ESPN now stands for Everyone Speaks Politically Now.

"NBA Countdown" analyst and former five-time NBA all-star player Chauncey Billups claimed Wednesday that Trump’s election victory is “disturbing to me” - and that he fears his children will have fewer "opportunities" because of Trump.

It’s just disturbing to me. I mean, yesterday before I got on the plane to come here I went by and spent a little time with my grandmother. She’s 82 years-old. She’s from Mississippi, so you can imagine what she’s seen in her lifetime.

We talked a little bit about this Election Day. She was just so nervous that this would happen to be honest with you. For me, I feel bad for her. I feel bad for her generation. They’re seeing men like this [Trump] say the things that they’ve said about women.

For me, I was raised by some very, very strong women. My mother, my grandparents, my aunties who’ve served as grandparents. I’m a dad of three daughters. I fear that the opportunities that have been afforded to some people of different races in this country, they won’t be afforded to my kids. It’s disappointing.

I wasn’t aware that black people and people of other races will have their rights taken away after Trump takes office. I didn’t know that was how it worked. Thanks, Chauncey.

Not to be outdone, fellow "NBA Countdown" analyst and former player Jalen Rose followed up on Billups’ comments regarding the post-election fallout with some thoughts of his own on the mentality among current NBA players.

“Now that Donald Trump will be the commander-in-chief, don’t be surprised when multiple athletes decline the opportunity to visit the White House,” Rose said during the broadcast.

Because Trump is a racist, and the majority of the players in the NBA are black. Gotcha. Oh crap, I said black. Oops now I’m a racist, right? I’m not quite sure how the media’s dangerous game works.

Rose somewhat walked back his comments by adding Trump wasn't the only divisive factor in this election.

“He has offended a lot of people. But that’s what happens in politics,” Rose continued. “It’s not necessarily independent to him, but we can’t sit here and say this has not been one of the most polarizing presidential races for both candidates.”

That makes what he said earlier totally OK in the eyes of his peers in the sports world and the media at-large. Right?

ESPN needs to stick to sports, and then maybe people would stop changing the channel.

For video of Billups' and Rose's comments, watch below: