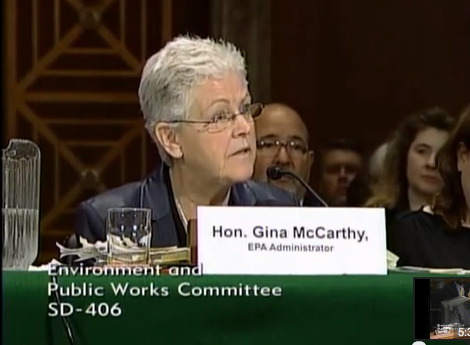 During an Environment and Public Works Committee hearing, head of the Environmental Protection Agency Gina McCarthy defended the EPA's request for an $8.6 billion discretionary budget (a 6 percent increase) for fiscal year 2016, arguing that climate change is a "real" threat and “a science fact,” “not a religion” or "belief system."

When questioned by Sen. Jeff Sessions (R-Ala.) regarding the EPA’s predictions on global warming, however, McCarthy was unable to use the “facts” to her advantage.

The heated exchange went as follows:

SESSIONS: “When we go to our states, the group we have the most complaints about from our constituents—whether it’s highway people, whether it’s farmers, whether it’s energy people—is the Environmental Protection Agency. It’s an [agency of] extraordinary overreach. And you apparently aren't unaware of the pushback that’s occurring in the real world…

"I'm not inclined to increase your funding 6 percent above. So now you say that we’ve got a crisis and there are dangers out there. Let me ask you this: There was an article from Mr. [Bjorn] Lomborg… from the Copenhagen Institute. He says, along with Dr. Pielke from Colorado, that 'we’ve had fewer droughts in recent years.' Do you dispute that?”

MCCARTHY: “I don’t know in what context he’s making statements like that but I certainly can tell you about the droughts that are happening today.” ...

SESSIONS: “I'm not arguing to you today that you are wrong about global warming because we have a cold spell. I'm asking you, don't you know worldwide data about whether or not we are having fewer or less droughts? ...

"What about hurricanes? Have we had more or less hurricanes in the last decade?” …

MCCARTHY: “There have been more frequent hurricanes and more intense in terms of landing those hurricanes on land. I cannot answer that question. It’s a very complicated issue.”

SESSIONS: “It’s not complicated on how many have landed. We’ve had a dramatic reduction in the number. We’ve gone a decade without a hurricane [Category] 3 or above…

"Would you acknowledge that over the last 18 years, that the increase in temperature has been very little, and that it is well below, matter of fact, 90 percent below most of the environmental models that showed how fast temperature would increase?”

MCCARTHY: "I do not know what the models actually are predicting that you are referring to. There are many models.”

SESSIONS: "So let me ask you one more time... Are you asserting — Just give me this answer... If you take the average of the models predicting how fast the temperature would increase, is the temperature in fact increasing less than that or more than that?"

SESSIONS: “This is a stunning development, that the head of the Environmental Protection Agency—who should know more than anybody else in the world, who is imposing hundreds of billions of dollars in cost to prevent this climate temperature increase—doesn’t know whether their projections have been right or wrong.”

Watch the full exchange below.