Is it just me, or does the U.K. completely suck now? It’s become a Socialist haven where totalitarianism rules, and freedom is laughed at. Whether it’s the news concerning Alfie Evans or Count Dankula, the U.K. has an image problem, and it’s only going to get worse judging by this latest story.

The North Yorkshire Police bragged on their website on Monday that a man who used a laser jammer and gave traffic cameras the finger has been sentenced to eight months in jail.

North Yorkshire Police even sent out a smug tweet about their triumph over this dastardly senior citizen: 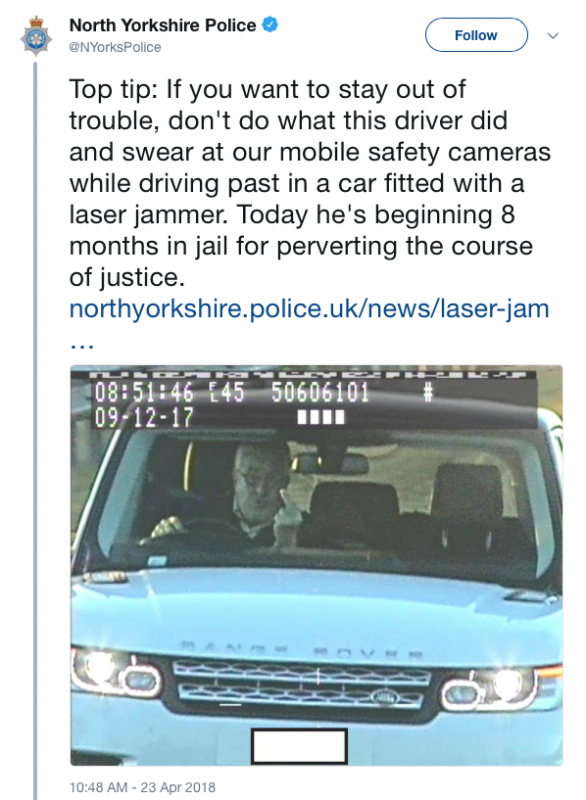 Perhaps tired of the Orwellian tactics that his home country now employs, Hill took matters into his own hands — and middle finger — by using an illegal laser jammer in his Range Rover.

Laser jammers are used to block police laser signal that determine if someone has been speeding or not. They are legal to buy, sell and own, but if you use one you can be charged with “perverting the course of justice.”

It probably didn’t help Hill’s case that he flipped traffic cameras the bird on more than one occasion. But, the offense of using a laser jammer was the primary reason for charging and convicting Hill.

Some people on Twitter didn’t feel that the punishment fit the crime: 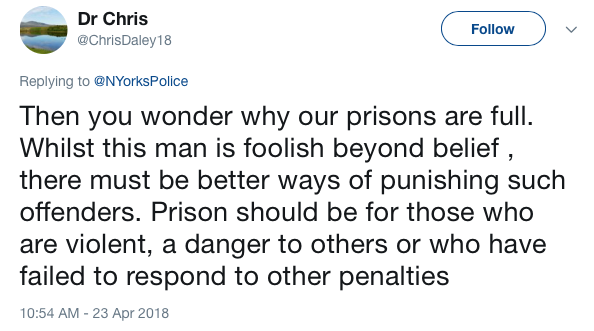 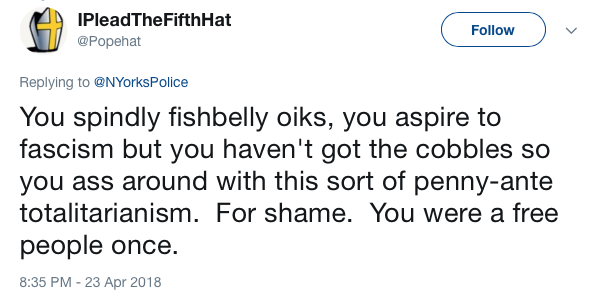 According to the article on the North Yorkshire Police’s website, the judge in Hill’s case said that “such actions ‘strike at the heart’ of the justice system and his sentence must act as a deterrent to others.”

Does that mean that an example needed to be made at the expense of an elderly man? If Hill had committed an actual serious crime — by all means — jail the man.

For those that say that Hill broke the law — which technically he did — and that his giving the traffic cameras the finger had nothing to do with his arrest and subsequent jailing, consider a comment by Traffic Constable Andrew Forth, the man who led the super serious investigation.

“If you want to attract our attention, repeatedly gesturing at police camera vans with your middle finger while you’re driving a distinctive car fitted with a laser jammer is an excellent way to do it,” Forth said.

Also, if Hill using the finger wasn’t a part of this case, then why does the North Yorkshire Police article mention hill’s use of the middle at all?

They even posted a video below their initial tweet with all the times Hill gave traffic cameras the one-finger salute:

And here's the video of him in action... pic.twitter.com/8SuvQGbAqb

Instead of constantly looking for people that have either subjectively offended others or for those that probably have offended the soft, weak police force, maybe law enforcement in the U.K. could focus on violent crime and offenses of a sexual nature, both of which have risen in the last year.

Was Hill in the wrong here? Sure. Should he have received some sort of punishment, like a fine for his offense? I'll agree with that. But, to jail an elderly man for eight months for a vehicle violation is certainly not a punishment that fits this particular crime.