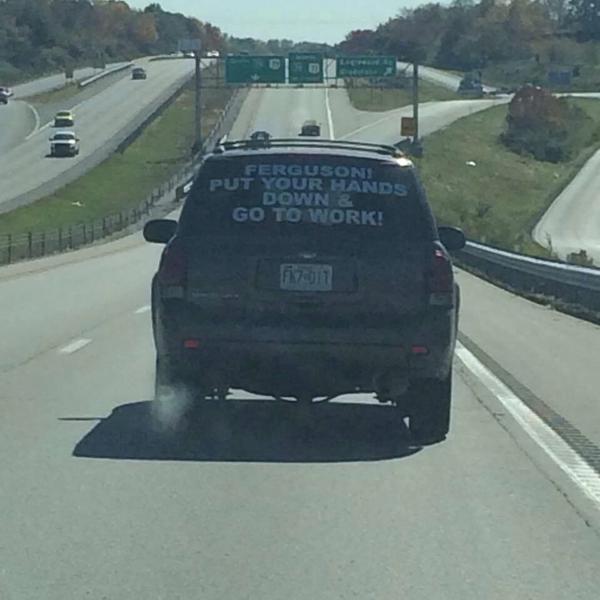 Since the Ferguson grand jury decision not to indict Missouri police officer Darren Wilson was announced Nov. 24, several “hands up, don’t shoot” demonstrations have taken place across the United States.

A number of stories have begun to surface showing how some have grown weary of the continued protests – what with demonstrators shutting down major highways, trapping shoppers by chaining shut mall doors, and invading local Wal-Marts.

A recent outward display of this disillusionment has just gone viral, showing a driver with a sign on the back of his car reading,

“FERGUSON! PUT YOUR HANDS DOWN & GO TO WORK!”

FERGUSON, PUT YOUR HANDS DOWN!! pic.twitter.com/x5rpfWJ8KZ

According to Mad World News, the sign has since received a great deal of liberal outrage, including accusations of racism.

It’s unclear where the picture was taken, but it does bring up some very good questions:

Do the rioters in Ferguson have jobs? Can the riots be traced back in one way or another to lack of employment? Or have some just made protesting and looting a full-time gig?