Leftists and leftist politicians usually love to trot out Ivy League studies — when it serves their purposes. All of a sudden, a study done by a Harvard educated researcher isn’t good enough because a study he did found information that wasn’t flattering to failed presidential candidate Hillary Clinton’s narrative that she was cheated out of the presidency in 2016.

Dr. Robert Epstein, who earned his Ph.D in psychology from Harvard University, has taken Clinton to task for the “blatant lies” she told about him and his study, which claims that Google shows “pro-Hillary bias” during the 2016 election.

Epstein testified in July, in front of Congress, that he isn't a Republican or conservative.

Clinton said Epstein’s study had been “debunked” in a Monday tweet that was in response to a tweet from President Donald Trump earlier in the day. 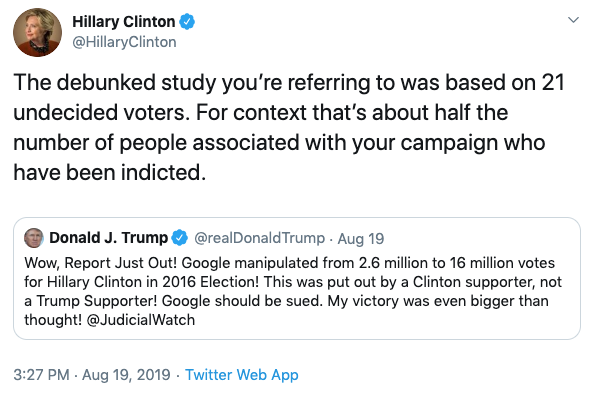 In the interest of fairness, Epstein addressed the context of Trump's tweet concerning his study:

#Trump tweet, point #3: It doesn't matter whether the bias in #Google search results was deliberate or not. Once it appeared - which it did at least 6 months before the election - it began shifting opinions & votes without people's knowledge & without leaving a paper trail.

After Clinton sent out her tweet, and multiple left-leaning outlets called out Epstein’s study — POLITICO even went so far as to call it a “new voter conspiracy theory” — Epstein took to Twitter to display his dismay over Clinton’s disparagement. Epstein notes that he "strongly supported" Clinton "for many years." 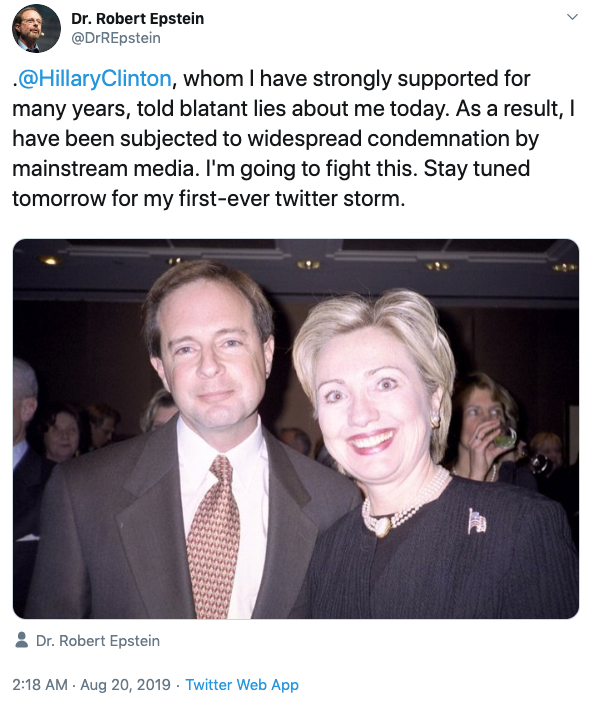 As noted at the end of the previous tweet, Epstein followed through and posted multiple tweets on Tuesday, all of which referenced Clinton, aimed at providing backup for his study (Again, Epstein notes how he and his family have supported the Clinton's "for decades"):

Now, switching to .@HillaryClinton: This is going to hurt me to write, because I & my whole extended family have been strong supporters of the Clintons for decades. I have a framed, signed letter from #Bill on the wall near my desk. But #Hillary should be ashamed of herself. pic.twitter.com/FKyLiKonyw

#Hillary has long depended on #Google for both money & votes. Her largest donor in 2016 was Alphabet/Google. Her Chief Technology Officer during the campaign was Stephanie Hannon, a former Google exec. And then there's #EricSchmidt, longtime head of Google - the guy in the pic: pic.twitter.com/dSV8wOPwAH

A leaked email showed that in 2014 #Google's #EricSchmidt offered to run #Hillary's tech campaign (see pic). In 2015, Schmidt in fact funded The Groundwork, a highly secretive tech company, the sole purpose of which was to put Clinton into office. https://t.co/rXMNH9bLYV pic.twitter.com/MRjGpCJcvr

#Hillary: If my work has been "debunked," why was it included in a volume just published by #Oxford U.? Why have I been invited to speak about it at prestigious venues worldwide: #Stanford U., #Yale Law School (where both you & Bill went), even our #Senate (where you served)? pic.twitter.com/rmMeB1oJn3

#Hillary: I know you're in #Google's pocket, but for the sake of our #democracy, I urge you listen to my recent Congressional testimony (https://t.co/cMYQ5pnjki) & to scan the 58 essays & conference papers I list at the end of my written testimony: https://t.co/AN3RtdYp65 pic.twitter.com/Tz2vfCJGof

#Hillary: If you examine my work carefully, you will find that it adheres to the very highest standards of scientific integrity. You will also conclude, I believe, that #Google poses a serious threat to the free-&-fair election & to human autonomy. See https://t.co/T2coTfZt5m

#Hillary: #Google poses 3 serious threats to humanity: 1) an obscene level of #surveillance across 200+ platforms, 2) the power to determine what content 2+ billion can or can NOT see (#censorship) (https://t.co/THZqV4u0ov) & 3) invisible #manipulation on a massive scale.

#Hillary: Is that what you want your legacy to be? Whistleblowers & leaks from #Google have confirmed that the company blacklists, re-ranks & uses "ephemeral experiences" (which I study) to control people worldwide. Do you approve? https://t.co/xZEV7PqyHu

#Hillary: If Big Tech cos. support the same candidate in 2020, they can shift 15M votes her way without people knowing how the shift occurred. If you had a choice between preserving #democracy & putting your candidate in office, which would you choose? https://t.co/gHbvbjd6tS

#Hillary: Among other tools, they can use "ephemeral experiences"-a term from a #Google email that leaked to @WSJ in 2018-to shift votes without leaving a paper trail. Ephemeral experiences like those search results I found that were biased in your favor. https://t.co/73CWSocIu4

#Hillary: If I haven't yet convinced you that the tweet you sent about me yesterday was unjustified & deeply flawed, please read these recent comments on my work by #ChuckNorris. He might be a lowly #conservative, but he still kicks butt. https://t.co/EfBt3TkRY7 pic.twitter.com/lDijqO0qOn

Finally, #Hillary: I have always admired you as a self-sacrificing person who is trying to improve people's lives, and I have tried to emulate you in these ways - as best I can. I also know you've sometimes been punished for your good deeds. I can relate. With admiration, /re pic.twitter.com/Ep1c4wqsH9

That is a lot to unpack.  Epstein posed a very interesting question in one of the tweets, again directed at Clinton, that should at least make the former First Lady question whether she should keep up her claim that Epstein’s study was “debunked.”

“If Big Tech cos. [companies] support the same candidate in 2020, they can shift 15M votes her way without people knowing how the shift occurred,” Epstein wrote before asking his question. “If you had a choice between preserving #democracy & putting your candidate in office, which would you choose?”

That shouldn’t only be a question for Clinton, but for every other American who worries about the validity of the election process.