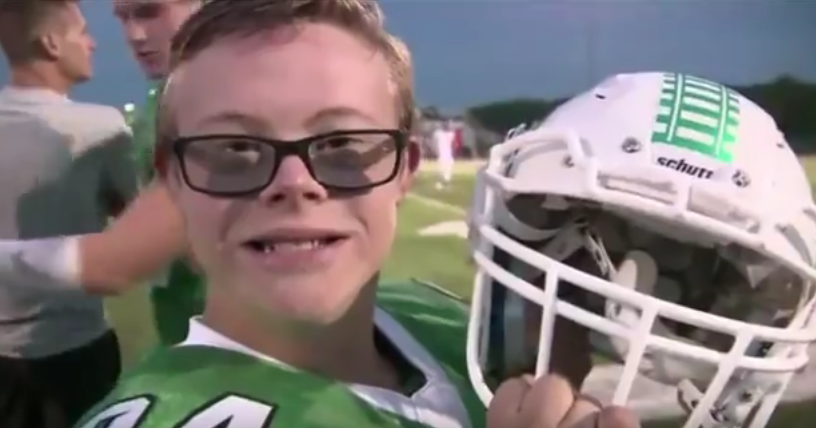 “It brought tears to my eyes tonight,” said Novi High School head football coach Jeff Burnside, “and I am sure tears all over the place.”

When you read this story, you’ll find that Burnside’s comment was an understatement.

The team's water boy, senior Robby Heil, has been the “hydration manager,” as the teams calls him, for all four years at Novi High School in Michigan. Heil has Down syndrome, and according to Burnside has been an integral part of the football team.

You can find Heil on the sideline every game wearing his Number 24 jersey, just like he was for this past Friday’s game against South Lyon East High School.

But Burnside, Novi High and South Lyon East wanted to give Heil a moment he would never forget -- a surprise also meant for Debbie Heil, Robby’s mother.

Players, students and coaches at Novi High had learned earlier in the year that Debbie was terminally ill with bone cancer.

Robby had always dreamed of scoring a touchdown in a game, and last Friday, players and coaches from both schools turned that dream into a reality.

Robby was brought into the game, received a hand-off and promptly sprinted towards the end zone as chants of “Robby” rang out in the crowd. Debbie fell to her knees with emotion.

"I dropped to the ground because I was so emotional when I saw him make that touchdown. I've always been proud of him being the water boy, or as people call him the hydration manager, but this was incredible. He's Rudy tonight. He's Rudy."

Both schools should be commended for their heart in such a heartbreaking situation. Joe Pesci, the opposing South Lyon East coach, gave Robby a custom jersey as well.

For the local news story of this event, watch below: