DNC Chair Ousted from Convention, Pushed to Resign Because of Wikileaks Release 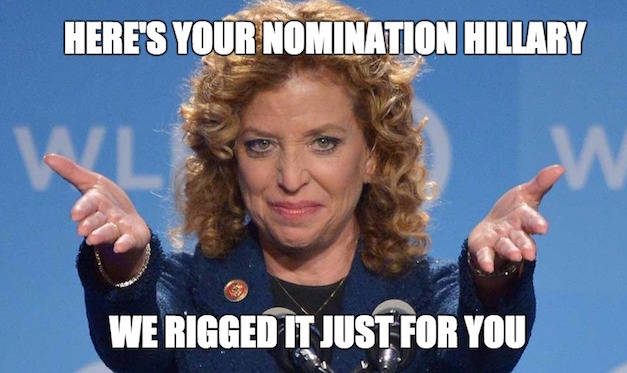 In what may be an unprecedented development, the Chairman of the Democratic National Committee  Debbie Wasserman-Schultz will not speak at, or even preside over, the Democratic convention - and is being pressured to resign - all because of the fury over the release of DNC emails by Wikileaks.

The emails leaked by Wikileaks seem to support claims by Sanders and his supporters made during the primaries that the system was rigged in favor of Clinton.

For example, one email exchange with the subject line “No sh*t,” (asterisk added)  the CFO of the DNC, Brad Marshall, a Southern Baptist, tried to come up with a scheme to hurt Sanders in Kentucky and West Virginia by demonstrating that  Sanders, who was raised Jewish, is not really a Jew but an atheist.

It might may no difference, but for KY and WVA can we get someone to ask his belief. Does he believe in a God. He had skated on saying he has a Jewish heritage. I think I read he is an atheist. This could make several points difference with my peeps. My Southern Baptist peeps would draw a big difference between a Jew and an atheist.

An exchange from early May 2016 seemed to indicate the party's approval and cover up of Hillary Clinton's campaign using funds raised for down-ballot campaigns for the Clinton primary battle against Sanders, and a discussion of how the supposedly neutral DNC could to fight Sanders' accusation of the misuse of funds.
This was from the DNC's lawyers:

My suggestion is that the DNC put out a statement saying that the accusations the Sanders campaign are not true. The fact that CNN notes that you aren’t getting between the two campaigns is the problem. Here, Sanders is attacking the DNC and its current practice, its past practice with the POTUS and with Sec Kerry. Just as the RNC pushes back directly on Trump over “rigged system”, the DNC should push back DIRECTLY at Sanders and say that what he is saying is false and harmful the Democratic party.

In another series of email exchanges, Wasserman-Schultz asked NBC's Chuck Todd and MSNBC head Phil Griffin to stop what she perceived as the Morning Joe hosts 's favoritism toward Bernie Sanders:

Re: Chuck, this must stop
Chuck, see below. I would like to discuss this with you today. Can you reach out to Luis to schedule a call? Thanks. DWS

The email included an article describing Mika Brzezinski's call for  Wasserman-Schultz to resign, to which Joe Scarborough added that the DNC has rigged the entire process:

On Wednesday, MSNBC’s “Morning Joe” co-host Mika Brzezinski called for DNC Chair Representative Debbie Wasserman Schultz (D-FL) to “step down” over her handling of this year’s Democratic presidential primary. After playing a clip of Wasserman Schultz, Brzezinski said, “This has been very poorly handled from the start. It has been unfair, and they haven’t taken him seriously, and it starts, quite frankly, with the person that we just heard speaking. It just does.” Brzezinski added of Wasserman Schultz, “She should step down.”  Brzezinski’s co-host, former Republican Congressman Joe Scarborough wondered why Sanders would “get in line” for the Democratic Party, given that they “rigged the entire thing,” and that if he was in Sanders’ position, “I’d say, ‘Go straight to hell, I’m running as an independent.’”

Along with reaching out to Todd, the party chairman reached out to MSNBC President Phil Griffin;
In one email she said

This is the LAST straw. Please call Phil a Griffin. This is outrageous. She needs to apologize. DWS

And in a second she said:

I think we need to speak to both of them [Todd and Griffin]. I’ve been talking to Phil about this since our breakfast. DWS

It is important to note that, while the emails indicate that a meeting with Chuck Todd was scheduled, there is no indication in the emails reviewed so far that the Morning Joe hosts withdrew their criticism or softened their coverage.

One could reasonably assume that, as more of these emails are read, there will be additional revelations about the Democratic Party's favoritism toward Hillary.